We don't have life without land: Holding ground in Honduras

Bajo Aguán, a fertile agricultural region in the north of Honduras, might at first glance look like a bucolic paradise. In fact, it is part of a historic land struggle. It is also the site of a war - a strange war, undeclared and largely invisible, where only one side has arms.

Consuelo Castillo, a community organizer in Lempira, a land reform settlement in Bajo Aguán, said, "Our goal is for everyone who is part of the land occupations to have access to land. Land is our first mother. For us farmers, we don't have life without land." 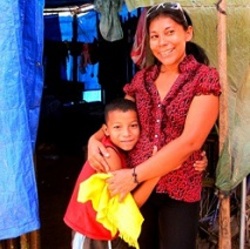 "We're fighting for our kids. We've started this movement for our children so they can have their basic needs met, live in dignity, and have access to education. The political assassinations have left some children without mothers, without brothers. The kids are the ones that are impacted the most."

Consuelo and her neighbors live in homes made of blue tarps, surrounded by patches of corn and rows of African oil palms. The 3,000 residents of Lempira and five other settlements have been peacefully occupying land for three years. They insist the land has been taken from them, mainly by wealthy landowners and palm oil companies who are making money off the global craze for biofuel. In the Lempira settlement, the families have reclaimed the area from the country's largest and most infamous landowner, Miguel Facussé.

In response to the occupation, Facussé and other land owners, together with palm oil companies and the backing of government forces and the World Bank, are waging their war. In Bajo Aguán alone, between January 2010 and February 2013, 89 small farmers - many of them also leaders in the land movement - have been murdered. Facussé and the others also use arrests and death threats among their arsenal of weapons to try to eject the settlers.

While the communities fight for legal right to the land, they also pursue their long-term vision. Lempira, for example, has created homes, turned the plantation into a working cooperative, laid the concrete foundation for a school, and created a collectively owned store. Residents are working towards food sovereignty, liberatory education systems, and collectively run media.

The History and the Stakes in Land Reform

The Honduran government originally recruited farmers to move to the Bajo Aguán and cultivate export crops in the 1960s and 1970s, offering promise of collective titles for those who worked the land for a prescribed number of years. Farmers came and established dozens of cooperatives, growing food for themselves and for local sale, and African palm for export. But in 1992, the Law on Modernization of Land allowed collectively owned land to be put up for sale. In the following years, many farmers sold their parcels for almost nothing, either because wealthy landowners used violence to coerce them or because of financial pressures.

Most of the cooperatives disappeared as land transferred to a few hands. However, some survived, including the Aguán Small Farmers' Movement and the Unified Movement of Aguán Farmers, and began organizing to reclaim the land.

In 2008, pressed by small farmers and indigenous groups, then-president Manuel Zelaya pushed forward a land reform decree that would have redistributed large tracts and granted titles to the farmer cooperatives in Bajo Aguán and elsewhere. The following year, in an attempt to block the changes and also to halt the grassroots movement for constitutional reform, the elite and the military - with at least tacit support from the US government - led a coup against Zelaya. Post-coup governments have made it clear they would not recognize the land reform decree.

The new settlements in Bajo Aguán and elsewhere are a response to this. The occupations are not just efforts to create homes and survive through farming, but are also acts of resistance to the widespread handover of land to the private sector.

Consuelo said, "No matter what happens, we're going to keep on fighting for our sisters and brothers who gave up their lives, whose blood was spilled for this land God gave to us, the Honduran people, so that we could all enjoy the land's natural resources and wealth. Our martyred sisters and brothers may be lying in the grave right now, but as far as we're concerned, they're still here with us, standing by our side in this fight. We are not going to give up the struggle. We're going to keep at it to the very end, no matter what happens."

To learn more about the crisis and offer solidarity:

* Sign the petition to end militarization in the Bajo Aguan area, pressure the US government to end military aid to Honduras, and push for the acknowledgement of indigenous rights.

* Provide much-needed financial support to the small-farmer cooperatives and indigenous land reform movements in Honduras. Other Worlds works closely with one key grouping, the Council of Indigenous and Popular Organizations of Honduras, or COPINH (see next week's article), and will get your donation directly to them ([email protected]).

* Participate in local and global campaigns against land grabs. Learn how to join actions to safeguard lands at Farmlandgrab or Land Research Action Network.