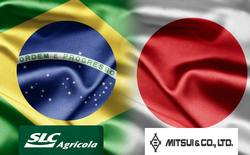 SLC Agricola, one of Brazil's largest soybean producers with cotton, corn and coffee operations, will have a 50.1 percent participation in the venture that will start operations in the northern frontier agricultural state of Bahia.

The companies hope to plant 11,857 hectares of soybeans and 10,045 hectares of cotton on the property for the upcoming 2013/14 season, SLC Agricola said in a statement late on Monday. It did not give an amount to be invested in the new venture, which still needs approval from Brazilian regulators.

Mitsui has been developing agricultural projects in Brazil via its subsidiary Multigrain since 2007.

Japanese grain handlers are raising their stakes in Brazil, one of the few places in the world with room to ramp up agricultural output for a growing global population.

The Nikkei business daily reported in May that another Japanese trading house, Mitsubishi Corp, plans to acquire a majority stake in Brazilian grain company Los Grobo Ceagro do Brasil in a deal worth about 50 billion yen (U.S. $495 million). (Reporting by Caroline Stauffer; Editing by Chizu Nomiyama)