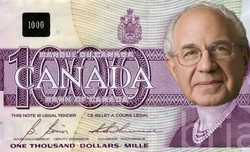 Canadian billionaire Ned Goodman holds an 83% stake in Blue Goose Capital Corp. – the largest organic beef operator in North America that produces not only organic beef, but poultry and fish as well.

Goodman, who oversees about C$10 billion ($9.6 billion) for Dundee and its investments in real estate, precious metals, energy and infrastructure, sold the last of the company’s Bank of Nova Scotia (BNS) shares earlier this quarter. Dundee held Scotiabank stock valued at about C$519 million as of March 31, according to the first quarter earnings report, including shares acquired after the bank purchased the DundeeWealth Inc. asset-management unit for C$2.3 billion in 2011.

“Our whole investment modus operandi is to get involved in those industries and companies that will gain from an inflationary event,” Goodman, 75, said in an interview at Bloomberg’s Toronto office Aug. 1. “I’m more bullish on gold now than I’ve ever been.”

Goodman, who began managing investments in 1962 with Austin Beutel and Edward and Peter Bronfman in Toronto for Edper Group Ltd., the predecessor of Toronto-based Brookfield Asset Management Inc. (BAM/A), is putting his cash into hard assets. With the U.S. Federal Reserve and other central banks printing money, it’s only a matter of time before currencies lose value and inflation rises, Goodman said.
‘Completely Crazy’

“The world is totally upside down right now -- it’s completely crazy,” Goodman said, clicking off his Rolex watch and slinking the chain between his fingers. “I don’t know of another time when every country in the world was printing money.”

Fed Chairman Ben S. Bernanke began so-called quantitative easing in 2008 during the financial crisis, and the bank is buying $85 billion in bonds each month in an effort to keep interest rates low and spur economic growth. Japan and the European Central Bank created similar programs.

Goodman said he doesn’t know when inflation will rise or how drastically, but that his investment strategy is a pre-emptive strike against that risk.

“I don’t wait for inflation,” he said. “It’s hard to call, but it’s impossible for me to see the U.S. getting out of trouble without printing more money and it’s impossible to see how Europe survives in the form that it’s in. You look around the world and you say: ‘We’re going to have to have some inflation.’ I want to own assets that are inflation-proof.”
‘Buffett Freak’

Toronto-based Dundee, which Goodman founded in 1991, rose 64 percent in the 12 months through yesterday, driven by gains in real estate, and outpacing the 4.6 percent rise in the Standard & Poor’s/TSX Composite Index. The company returned 165 percent in the five years through yesterday, including dividends, beating Brookfield’s 30 percent gain and the 52 percent increase at Warren Buffett’s Berkshire Hathaway Inc., whom Goodman reveres.

“I am a Warren Buffett freak,” he said of the Berkshire Hathaway CEO and third-richest person in the world, according to the Bloomberg Billionaires Index. “His whole process is really quite simple: he buys things for less than they’re worth.”
Gold Slides

Buffett said in May gold held no appeal even after the recent slide because it “just sits there and you hope somebody pays you more for it.”

Gold, which rose for 12 consecutive years, slipped into a bear market in April and has plunged about 33 percent to $1,285.30 from its peak in 2011. Prices may average $1,364 an ounce next year and decline to $1,344 in 2015, according to the average of analysts’ estimates compiled by Bloomberg. The S&P/TSX Global Mining Index of 111 companies dropped 21 percent in the 12 months through yesterday.

Dundee gives investors the ability to indirectly invest in an underlying asset such as gold or real estate, and doles out favorable returns from assets such as REITs, said Robert Almeida, fund manager at Portland Private Equity LP, in an Aug. 6 phone interview from Burlington, Ontario. Portland’s parent firm, Portland Holdings Inc., manages about C$1 billion, including Dundee shares.

“There aren’t many companies like that around,” Almeida said. “It gives us access to traditional and non-traditional assets.”

Goodman owns 99 percent of Dundee’s common shares and 5 percent of the subordinate voting shares, or 86 percent of total votes and a 10 percent equity stake, according to the company’s 2012 annual report.

The Montreal-born investor looks for assets that will feed his funds over time, and said agriculture fits that bill. Dundee has an 83 percent stake in Blue Goose Capital Corp., a closely-held Canadian company that produces organic beef, poultry, and fish, according to Dundee’s 2012 financial statement.

Blue Goose is the largest organic beef operator in North America and has 13,000 head of cattle that includes certified Black Angus, with enough farmland for about 37,000 more, Goodman said. His firm’s investment includes a ranch that raises “wagyu” cattle, or animals that are bred to produce Kobe-style beef, known for its flavor and often priced at a premium to other cuts.

Whole Foods Market Inc. (WFM), based in Austin, Texas, is their largest client, Goodman said. Dundee may benefit as the U.S. supply of beef is squeezed. Production is plunging to a 21-year low as ranchers cut herds due to skyrocketing feed costs.
‘Fellow Dundonians’

The contrarian investor who calls his shareholders “my fellow Dundonians” in the annual reports he writes himself each year, also sees value in potash. The $20 billion global market for the crop nutrient was roiled when OAO Uralkali, the biggest supplier of the commodity, said in July it would end production restrictions that underpinned global prices. Shares of Uralkali and its biggest competitors, including Potash Corp. of Saskatchewan Inc. and Mosaic Co., plunged on the announcement.

“We’ll wake up some day and we’ll find the potash price is up because there’s a shortage,” Goodman said. “My mind says we should own more of Potash Saskatchewan, it’s the best one in the world and it still makes money even at these prices.” Potash Corp. will need to slow expansion as will other producers of the commodity, leading to a shortage and a share price rise, he said.

Perhaps the most visible of Goodman’s investments is in downtown Toronto. The Canary District neighborhood that will house athletes of the 2015 Pan/Parapan American Games is under construction with several cranes on site. The area will be converted to mixed-use, including condos and retail space after the event.

Dundee invested C$15 million and provided C$41 million in credit for the project, alongside the Canadian government. Dundee will receive its investment back plus an additional C$50 million, according to its annual report.

“I’m still keen on real estate,” Goodman said. “I’m keen on anything that’s going to live with higher inflationary numbers, because I can’t see the world getting out of the problems that it’s in.”

To contact the reporter on this story: Katia Dmitrieva in Toronto at [email protected]

To contact the editor responsible for this story: David Scanlan at [email protected]