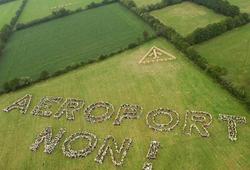 Land grabbing and the concentration of land ownership in Europe are leading to the concentration of control over land, water, seeds and financial resources in the hands of a few economic and political decision-makers rather than in responsible civil governance.
25 June 2013

At the heart of the growing inequalities in Europe are the issues of land concentration and land grabbing. It is a critical subject and is having severe impacts on the prospects and viability of our communities.

The report Land Concentration, land grabbing and people's struggles in Europe, [1] written by the European Coordination Via Campesina and the Coalition Hands off the Land explores this issue. Based on case studies in 13 European countries, it reveals the absurdity of the current land tenure evolution in Europe. The report highlights that across Europe we are witnessing the acceleration of four key trends:
Across Europe these changes are being driven by agricultural policies, national and European, that benefit large agribusiness and are causing severe economic, social and cultural marginalization of small and medium scale farmers.

At the European level, the CAP - which is the vehicle for delivering the European Communities vision for agriculture – does nothing to support the development of small-scale agriculture despite clear evidence that it is the form of agriculture most beneficial for our environment and communities.

The numerous impacts are visible in the whole of Europe. It leads to the closing down of hundreds of farms each year which are replaced by highly mechanized agribusiness operating on an industrial model, resulting in a widespread reduction in rural employment.

These issues are increasing rural to urban migration and the corresponding growth of cities. All over Europe, land grabbing and industrial farming are maintaining a similar pace as human migrations and the exploitation of workers, very often farmers expelled from their lands. Thousands of people travel huge distances to work as a cheap and flexible labor force in poor conditions with low wages in European agro-industrial companies.

Furthermore, these industrial farming practices pollute natural resources and are responsible for the loss of biodiversity, the destruction of ecosystems and excessive greenhouse gas emissions.

From agriculture to food sovereignty, from land management to the management of natural resources, from employment to building local economies, from poverty to health care, from democracy to governance; these issues affect all the Europeans.

Taking the findings of this report into account, we, citizens and civil society organizations, concerned with the cultural, social, economic and environmental future of Europe, ask for the land to be managed in the public interest. Land must never be treated as a commodity. We must defend and recover the common use of fields, forests and natural resources. Priority must be given to peasant farming and food production and must aim at food sovereignty and not just at the development of private commercial interests. Access to land must be given to those who work on it.

This is what we demand:

(1) Stop and reverse the trend towards concentration and commodification of the land!
(2) No more land grabbing!
(3) Guarantee access to land for the farmers as a basic condition to achieve food sovereignty, especially for young people and landless farmers! (4) Implement the CAP as a way to develop and improve peasant and small farming


NOTES:
[1] The report is presented to the European Parliament on the 25th of June