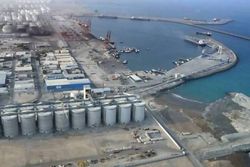 The grain silos in Fujairah, UAE are capable of storing 275,000 tonnes of wheat and rice, enough to feed the population for six months. (Photo: Invest AD)

The imposing structures on the edge of the Fujairah coastline represent the latest frontier in the UAE's campaign to secure access to food for its citizens. The grain silos are capable of storing 275,000 tonnes of wheat and rice, or enough to feed the UAE population for six months.

In the face of a rising population and depleting farming resources, they are also an example of how the Government has had to act more smartly to tackle the issue of food security.

"Food security has become a more multi-faceted issue since the 2007 to 2008 commodity price boom," said Cyrille Fabre, a partner in the Dubai office of the management consultancy Bain & Company, referring to the 250 per cent jump in world food prices between 2003 and 2008.

Prices have since moderated but the spike was enough to spring officials into action. As well as plans to build silos to store key commodities, the Government's approach included partnering private sector players such as Al Dahra Agriculture to secure overseas land and tightening food retail price controls, particularly during Ramadan.

The approach is a turnaround from the 1970s and 1980s, when the Emirates and other GCC states focused on widening their agricultural output in an effort to become more self-sufficient. Such a strategy has since been gradually abandoned because of the rapid depletion of water resources as populations have boomed.

As a result, the UAE's reliance on food imports has risen from about 70 per cent in the early 1990s to more than 90 per cent now. The trade imbalance leaves the country vulnerable to the risk of imported inflation and export embargoes, dangers that officials hope to minimise by diversifying sources of imports.

Against the backdrop of a population forecast to swell from 7.8 million to 12.2 million by 2050, some observers are also questioning whether enough is being done to address longer-term food security.

After a flurry of projects were announced during a time of particularly high global food prices over 2007 and 2008, many were never followed through as the global financial crisis squeezed funding, says Eckart Woertz, a senior researcher at the Barcelona Centre for International Affairs, and the author of the book Oil for Food.

"There's a huge discrepancy between what the media has portrayed and what has actually happened on the ground," he said.

It is uncertain whether the Fujairah grain silos are yet operational. Nobody was available on Thursday to comment from Invest AD, the government-owned wealth fund charged with helping to oversee the project. Fujairah Municipality has said the area surrounding the development has room for a further 30 silos, taking the total storage capacity to 700,000 tonnes.

A spokesman for the Food Security Center Abu Dhabi, the arm of the Abu Dhabi Food Control Authority responsible for food security, said it was not the agency's responsibility to comment on the silos. Still, overall he said the agency was focused on fulfilling its 2010 mandate of enabling residents to access "healthy, nutritious and safe food".