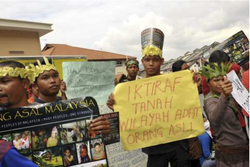 An Orang Asli man holding up a signage which says “Acknowledge the Orang Asli’s traditional territories” during the first ever pan-state protest in Seremban. The protest was staged outside the State Secretariat building after the Chief Minister made a statement saying that the Orang Asli there are nomadic and squatting on state land (16 November 2011). Photo: Sze Ning