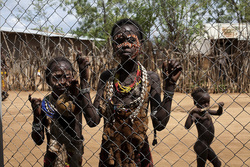 The Ethiopian government’s controversial “villagization” resettlement program to clear vast areas for large-scale land investments is funded largely by international development organizations. The first report, Development Aid to Ethiopia, establishes direct links between development aid--an average $3.5 billion a year, equivalent to 50 to 60% of Ethiopia’s national budget--and industrial projects that violate the human rights of people in the way of their implementation.

The report also shows how indirect support in the form of funding for infrastructure, such as dams for irrigation and electricity for planned plantations, plays a role in repressing local communities by making the projects viable.

Ethiopia is one of the largest recipients of US development aid in Africa, receiving an average of $800 million annually--even though the US State Department is well aware of widespread repression and civil rights violations. A strategically located military partner seen as a leader in the “African Renaissance,” Ethiopia is gently described as having a “democratic deficit” by the United States Agency for International Development (USAID).

Yet this phrase does not begin to describe or justify the kind of routine violence and coercion taking place on the ground and documented in the Oakland Institute’s new report, Ignoring Abuse in Ethiopia: DFID and USAID in the Lower Omo Valley.

The massive resettlement of 260,000 people of many different ethnic groups in the Lower Omo Valley has been fraught with controversy and has set off an alarm among international human rights groups. Information around forced evictions, beatings, killings, rapes, imprisonment, intimidation and political coercion, has been shared, and these tactics have been documented as tools used in the resettlement process.

In response to allegations, DFID and USAID launched a joint investigation in January of 2012. After completing their visit, they came to the puzzling conclusion that allegations of human rights abuses were “unsubstantiated.” The contents of this new report, which include first-person accounts via transcripts of interviews that took place during the aid investigations last year, overwhelmingly contradict that finding and question the integrity of the inquiry.

The interviews paint a very different story from what DFID and USAID reportedly saw and witnessed, and for the first time are made available to the public here.

It is worrisome that aid agencies rubber stamp development projects that are violating human rights. Worse, they have chosen to ignore the results of their own investigations.

“Bottom line, our research shows unequivocally that current violent and controversial forced resettlement programs of mostly minority groups in Ethiopia have US and UK aid fingerprints all over them,” said Anuradha Mittal, Executive Director of the Oakland Institute. “It’s up to the officials involved to swiftly reexamine their role and determine how to better monitor funding if they are indeed not in favor of violence and repression as suitable relocation techniques for the development industry,” she continued.

The Oakland Institute is an independent policy think tank working to increase public participation and promote fair debate on critical social, economic, and environmental issues. Starting 2011, the Institute has unveiled land investment deals in Africa that reveal a disturbing pattern of a lack of transparency, fairness, and accountability. The dynamic relationship between research, advocacy, and international media coverage has resulted in a string of successes and organizing in the US and abroad.