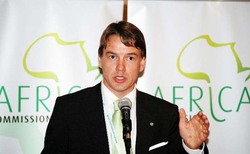 Denmark has prioritized 12 countries in Africa, where we "are present with a long-term perspective and with political and financial weight', as Danida puts it.

Africa must be developed in a rush in order to avoid global food crisis. It requires huge changes, including a confrontation with chiefs, the role of women and the view upon collective property, says Danish Minister for Development Cooperation, Christian Friis Bach (R)i.

Denmark will use its political influence in large parts of Africa to get rid of local cultures and traditions that hinder the development of African agriculture, says Minister for Development Cooperation Christian Friis Bach (R).

"It is certain that Africans will have to develop their agriculture. For their own sake. And for the entire world", says Christian Friis Bach. "The good news is that it can be done. Africa has a huge growth potential, and within a generation, we can transform Africa from being dependent on others for food to become the world's breadbasket. It requires massive investment, especially from abroad. And we're going to see very quick and very harsh structural changes, which large parts of the continent are not prepared for", he says.

The confrontation must address fundamental issues in the African societies: gender relations, land ownership and the power structure.

"Some have a rather romantic belief that traditional cultures have a value in themselves, and they want to sit down with the chief and fix things. I do not share this belief", says Christian Friis Bach. "For the poor farmers, who are the majority in the village, collective ownership, which is in practice administered by the chief, is usually of no value. They would be much better off if they owned their land. For women, the traditional norms has no value either. It prevents them from the equality they deserve. It is an ongoing local power struggle, and we must engage in this struggle”.

This is not just words. The Danish Minister for Development Cooperation actually plays a role in African politics. Most countries on the continent are dependent on Western aid, and donor countries often conspire to make demands that local governments have to acknowledge.

Denmark has prioritized 12 countries in Africa, where we "are present with a long-term perspective and with political and financial weight” as Danida puts it. This applies amongst others Uganda, Niger, Ghana, Kenya, Tanzania and Mozambique. [See all 12 countries below and on map in the attached pdf articleii]

"One of the things we particularly insist on is that women should be able to own and inherit land. This can increase agricultural production by 5-10 percent because women are far more productive and innovative in agriculture", says Christian Friis Bach.

[Q] But this is also completely contrary to ancestral traditions and values on which people build their identity. Can you as a donor allow yourself to change that?

"Yes, because not all values ​​are equally worthy. For me it is fundamental to give women equal rights to the land. Both human and political - and because it is the way to boost agricultural production", says Friis Bach.

The right over her own body

Women must not only have the right to land, but also the right to decide over their own bodies. This is another fundamental principle that at the same time will contribute to the economic development, he continues.

"Women have the right to decide when and how often they will bear children. This is crucial in order to allow them to get through school and complete their education. And population growth in Africa is so high that it seriously undermines their ability to solve the structural problems", says Christian Friis Bach.

[Q] By what right can you insist that our concept of equality should apply in Africa?

"Fortunately, it is not just our values. It is universal human rights, as developed by all countries worldwide through two hundred years. So we can allow ourselves to insist on these rights". Similarly, he perceives the inviolability of property as an important part of the civil and political rights. "And that is not a Western invention either”, says Christian Friis Bach.

Helle Munk Ravnborg, newly elected president of Danish ActionAid and senior researcher in poverty at the Danish Institute for International Studies, recently appealed in Politiken [the newspaper in which this interview is also published] that the government recognizes the reality that the majority of the land in Africa is collectively owned.

Christian Friis Bach would very much like to offer Danish assistance to register the collectively owned land to avoid that uncertainty about ownership is misused by corrupt officials and foreign investors.

"But I will insist that land ownership becomes private and individual. It is a fundamental condition for us to develop agriculture. Otherwise there is no incentive to invest in the land. No one builds terrasses, plants shade trees or buy fertilizers, if the harvest is not theirs”.

Unclear and collective ownership also slows down a key part of the transition: much larger and more effective farms based on foreign capital.

"In the long term there are very many people who need to move away from the agricultural sector and into the cities. But without ownership to the land, they cannot sell it. They cannot take money with them, which can be used to start a life in the city. Therefore, lack of land rights is in all ways a very large barrier to development”.

[Q] But the African societies have lived with the collective ownership in millennia, it is a fundamental part of their culture and tradition. Can you without further ado establish that it needs to change?

"Yes, I am relatively clear on that point. We just have to recognize that the system is not functioning".

[Q] Are you absolutely sure that the Western, market-oriented model works for Africa?

"I do not know if the market economy is a Western invention, I think it is rather universal and global. But yes, I am sure that the market economy functions for Africa. I have seen great many examples of this. Especially the African women farmers are very innovative when they get the chance".

[Q] You recognize that there will be swift and harsh structural changes. Can you allow yourself to impose a model onto African societies that large parts of the continent are not ready for?

"We must not impose anything on them. That is precisely why the individual land ownership is crucial. It gives poor farmers - and the women - a voice and a strength to resist changes that conflict with their interests".

[Q] But you insist on changing the gender relations, the land ownership rights and the power structures of societies. It took Europe several hundred years and fierce fighting to get through a similar development – can we expect and demand that Africans readily jumps to where we are today?

"The world cannot wait for Africans to spend as much time to build up capacity as we have used in our part of the world. There is enormous pressure on the global food supply. The 9 billion, we expect in 2050, will eat as if they were 12 billion because they live in the cities and eat more meat". "This happens while at the same time up to 25 percent of the agricultural land will be adversely affected by climate change. And while we must halve greenhouse gas emissions from agriculture. It is a phenomenal task. It is going to happen very quickly, and it will give resistance from the local population”.

But it would be wrong to see it as a battle between the rich investors in the North and the traditional societies in Africa, he adds. "If Africa does not develop and increase the production of food, it will not only hit the poor in Africa, but also the poor in the rest of the world where the food crisis also may be very harsh". "What is encouraging is that it can be done. I have just returned from a region in Ethiopia that previously was almost desert, but where massive investment has changed it into a green oasis, where you can harvest three times a year. There is now less poverty, more jobs and higher growth", says the minister.