Questions surrounding the 52,000 hectares owned by the multinational Cargill

Questions surrounding the 52,000 hectares owned by the multinational Cargill 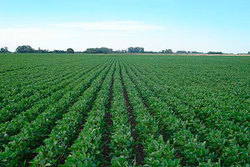 Cargill’s 52,000 hectares in Vichada are sown with soybeans and maize, according to the study presented by Oxfam (Photo: Semana)

According to the study published by the organization Tierras y Poder1, Cargill, the US cereal multinational, purchased, and currently owns, 52,574 hectares in Vichada. The investigation notes that a large estate was formed, contravening Colombian law number 160 (1994) that establishes a cap on the acquisition of lands that were once public “wasteland”2 and subsequently allocated by the state to small peasant farmers.

The philosophy behind this law is that public land should be primarily for poor peasant farmers, and that it is necessary to ensure that they maintain these properties to prevent a further concentration in the ownership of land in the country.

The law establishes that neither a person (nor a company) can purchase more than a single Agricultural Family Unit –Spanish initials UAF3—a measure that varies region by region, but one which is equivalent to the quantity of land from which a peasant family can derive their necessities and earn some income from its use. The act also mandates that were this public land originally given to a farmer (at any date), he/she can sell it after a certain number of years, but the restriction on the accumulation of more than one UAF is maintained over time.

According to the study, funded by Oxfam and undertaken by researcher Paula Alvarez, Cargill acquired 52,000 hectares that were originally land without a specific use owned by the state, by means of means of 36 simplified joint stock companies (SAS).4 Alvarez explained that the 39 lots were bought, one-by-one between the years 1989 and 1998, by these SAS firms, each of which in turn bore the names of the original property owners, names given to these lots by the former Colombian Agrarian Reform Institute (Incora) – now Incoder. They needed to create this number of companies so as to allow the circumvention of law 160, which prohibits the accumulation of public land under a single ownership originally allotted to peasant farmers.

In the analysis of Alvarez, these SAS functioned as mere intermediaries. This is evidenced by the fact that after the land was transferred to them, these 36 SAS companies, now in Cargill’s name, were liquidated.

"These SAS were created in Notary number 16 in Bogota, between May 2010 and August 2012, all with the same company domicile in Bogota, all sharing the same economic activity – the cultivation of cereals (except rice), pulses and oilseeds. They all have a single board member, a single legal representative and three alternate representatives all of whom are the same”, the researcher explained.

VerdadAbierta.com contacted Cargill by phone in their headquarters in Bogota, but on several occasions a secretary indicated that the company would respond by e-mail or call back, to give their version of the facts, but this did not occur.

At a presentation of the report this week Alvarez indicated that the 52,000 hectares are partitioned across 36 farms in the following way: 17, totalling 22,464 hectares, in La Primavera; another 17 making up 22,274 acres in Santa Rosalia, and five farms, with more than 5,838 hectares in Cumaribo. "They are all adjoining properties", said Alvarez.

The researcher highlighted changes in land valuations while being transferred between the SAS entities. The farm called Los Alpes, for example, was purchased by the SAS intermediary for 50 million Colombian Pesos in 2008, but when it was transferred to Cargill, the multinational purchased it for almost 7 billion pesos. In other cases, such as with the property known as Los Gansos, this was reversed: the lot was purchased in 2010 for 376 million pesos by an intermediate SAS then bought by Cargill for 1.4 million pesos.

The report notes that the multinational was advised by Brigard & Urrutia, the same law firm hired by the sugar company Riopaila S.A.5, to purchase land in Colombia’s Eastern plains.

The researcher noted that Cargill has its headquarters in Minnesota (USA) since 1865, but its activity has spread to 65 countries. "It controls 90% of commerce in grains, drinks and food globally. In Colombia, It has had a presence for nine years", said Alvarez.

According to the report, Cargill is represented in Colombia by four companies: Cargill de Colombia Ltda., Black River SAS, Cargill Trading Colombia Ltda. and Colombia Agro SAS. The first three have the same address and the same legal representatives, board members and statutory auditors. "Black River functions as a hedge fund, that is, it is the entity that manages stock market activities," Alvarez noted.

For the moment, the researchers clarified that they had not encountered pressure or violence with property transfers to intermediate SAS from their original owners (those that were given titles by Incora).

The first such study known, published on 8th of May last year, was from this portal (VerdadAbierta.com) in which it was documented the cases of Poligrow with 5,500 hectares in Mapiripán, and La Fazenda-Grupo Aliar and La Cristalina, with holdings of 16,000 and 25,000 hectares in Puerto Gaitan in Meta, respectively. In these three cases it was proven that, besides being originally undeveloped state land, the lands also had a violent past. (Read: Three Agroindustrials buying land with troubles and violence (Link in Spanish6)).

The Riopaila case was cited7 on June 5th, 2013 in a debate on political control by the representative Wilson Arias. According to the congressman, the lawyers created multiple companies so they could buy several adjacent properties and form a large estate. These lawyers had designed a scheme for the industrial sugar company, similar to that for Cargill, to enable the latter to buy 42,000 hectares of public lands awarded to small farmers in Vichada, where a prohibition on land accumulation was also in place.

In the Riopaila case, the law firm registered 28 SAS firms in the Bogota Chamber of Commerce, giving the companies the names of prospective property purchases. Later these SAS bought 43 lots in December 2010 and signed a contract with Riopaila renting them the 42,000 hectares for 30 years. (Read: Controversy over land operated by agribusiness and mining (Link in Spanish8) ).

VerdadAbierta.com contacted the legal firm and was informed that the response would come from Jimeno Acevedo Associates, an agency in communication strategies. When asked what was the response from the law firm to the study's affirmation that the creation of the SAS was a formula to bypass the law 160, so as to accumulate lands, the agency said:

"The function of a firm like ours, with 80 years of tradition and recognized for its best practices, consists of developing legal solutions for our clients. We do it in strictest compliance with the law, both in letter and in spirit.

The creation of the 27 SAS was done with the intention to have greater manoeuvrability should a decision be made to do business with smaller land lots.

The legal vehicle used was transparent, as evidenced by the registration of the 27 SAS in the Chamber of Commerce, the notification to the Superintendent of Companies and to the Bank of the Republic, and the corresponding payment of withholding tax.

In the Vichada there are about 40 companies developing agroindustrial projects. Aside from ourselves, most of the most recognized law firms in the country use similar vehicles in the acquisition of lands.

The land debate in Vichada is more political than legal. It has to do with the kind of rural development model the country should choose: peasant agriculture or agribusiness. Both are valid, and can also coexist, as has been expressed by President Santos on multiple occasions.

Right now the spirit of the law is the protection of rural peasant farmers and give them land so they can survive and improve their quality of life. In the project zone there are no peasants. The land acquired was used for extensive cattle ranching. There were no roads, schools, housing support, health clinics, energy or public services. The infrastructure and the services that exist today have been developed by the enterprises that invested, generating three thousand formal jobs"(Sic).

1 Spanish for Land and Power

2 Spanish “baldíos”; land that was out of use or used for dumping etc…