Kate Hodal reports from Koh Kong, where villagers claim they are losing their livelihoods to plantations that supply Tate & Lyle 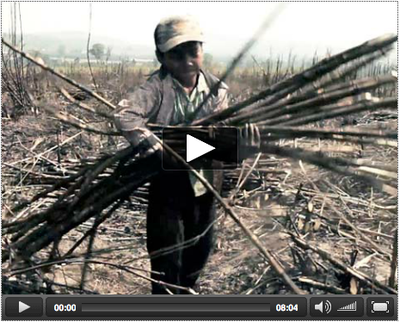 Link to video: The Cambodian villages destroyed by the sugarcane industry
The plantation extends as far as the eye can see, row after row of green leaves swaying against the dusky blue light until, finally, it merges with the horizon. There are no houses, no animals, no people. Just sugar.

Standing by a rickety wooden fence that separates her clapboard home from the field in front of us, Yoen Sarin, 29, waves her hand in an arc. "My land extended from there to just over there." She narrows her eyes. "The company tried to bulldoze their way closer but I built this fence, and even though they've already knocked it down twice, I'm not moving. I keep rebuilding it."

Yoen Sarin is just one of thousands of Cambodian farmers who claim they are losing their land and livelihoods to big sugar plantations, some of which are directly supplying the EU through companies such as Tate & Lyle Sugars.

Nearly 100,000 hectares (250,000 acres) have been cleared in three provinces to make way for sugar plantations since 2006, activists allege – and most of that land, they argue, has been stolen from subsistence farmers.

Sugar is big business in Cambodia, thanks to a preferential EU trade scheme called Everything But Arms (EBA), which allows Cambodian sugar to be sold duty-free on the European market at a minimum price per tonne. Official figures show that 97% of Cambodia's €10m (£8.5m) sugar exports went to the EU last year, and Tate & Lyle bought 99% of them.

Although the initiative is intended to bolster the world's least-developed countries, the villagers say they have not profited from the deal at all.

"When the company came in May 2006, they bulldozed without consultation or any environmental impact assessment," said Teng Kao, 52, a village representative from Koh Kong province who lost nearly 10 hectares to the plantations. "They bulldozed the fields and streams. They shot our animals. After about 100 families' land was taken away, we started taking pictures."

The "company" Teng Kao refers to is one of two Cambodian entities owned by the Thai group KSL. For the past two years, these companies have sold all of their sugar cane to Tate & Lyle. Now, Teng Kao and some 200 other villagers are taking their fight to the high court in London.

Backed by British law firm Jones Day, the villagers have filed a lawsuit against Tate & Lyle, claiming that KSL were complicit in government moves to evict them to make way for the plantations. They also say they were insufficiently compensated for the land they lost, and faced "multiple instances of battery and criminal violence" during which villagers were shot at and wounded, with one activist murdered.

The villagers are claiming compensation for some of the 48,000 tonnes – or roughly €24m worth – of sugar that Tate & Lyle's London refinery has allegedly received since 2010. Tate & Lyle denies that its supplier, KSL, was involved in land clearances and claims that the land was owned by the government when it was sold to KSL.

Land rights are a highly contentious issue in Cambodia. Private deeds were abolished under the communist Khmer Rouge, leaving subsistence farmers vulnerable to recent surges in land-grabs and mining and property developments. Campaigners estimate that nearly three-quarters of the country's arable farmland has been granted to private companies as economic land concessions, resulting in the displacement of more than 400,000 people since 2003.

Under Cambodian law, land possession can be established using various legal documents, not just land deeds. As many of the villagers in Koh Kong claim to have such papers, they say their land was stolen from beneath their feet. "I've been living here since I was born – this is my ancestral land," said Teng Kao

Tate & Lyle contends that it engaged a third-party organisation to ensure that KSL complied with legal, ethical and sustainability standards. The auditors concluded that land concessions were legitimate and that villagers who occupied the land "were given compensation and resettled by the Cambodian government prior to the concessions being granted".

Tate & Lyle says KSL provided documentation to prove that compensation had been paid and alternative land parcels provided to the villagers affected, and says it is confident that the sugar it has purchased from Cambodia "is free of breaches of human rights". But it also says it is ready to break its contract with KSL if "evidence is forthcoming of any wrongdoing by our supplier".

Since they lost their farmland to the plantations, many villagers say they have been forced to seek work from the very company they are now suing. "I had to pull my kids out of school and send them to work on the plantation after they took our land away because we couldn't afford to eat," said Chea Sok, 38, a claimant in the lawsuit.

"We work together in the plantation now cutting 1,000 stems of sugar cane a day [for 79p]. It's exhausting and hot and the bundles are so heavy for [my children], they get fever working in the field. They've hardly grown at all – sometimes we don't even have enough rice to eat."

While visiting one of the KSL plantations in January the Guardian saw at least a dozen underage children cutting sugar cane, including some as young as nine years old. The Guardian also filmed children receiving payment for their work on the plantation, and interviewed parents who confirmed that their children worked in the fields and received payment for their labour. While it is difficult to establish just how many children may be working in the fields at any given time, campaigners say that hundreds may cut sugar cane on the KSL plantations during harvest, based on their interviews with families affected by the concessions.

Tate & Lyle Sugars says it does not condone or authorise child labour and would investigate any evidence that its supplier was using it. It says it would take steps to remedy the situation if it found KSL had been using children on its plantations, and would terminate its contract with KSL if the situation could not be resolved. KSL did not respond to multiple requests for comment.

The villagers suing Tate & Lyle are only a small number of those affected by the EU's demand for Cambodian sugar. Activists from the Clean Sugar Campaign, a coalition of NGOs and villagers affected by the concessions, report widespread allegations of human rights abuses, including forced evictions across three provinces – Koh Kong, Kampong Speu and Oddar Meanchey – state-sanctioned violence, destruction of farmland and cattle, relocations to non-arable land, child labour, destruction of protected forest and little-to-no compensation paid to villagers. Those who have resisted being moved off their land have been beaten, shot at and imprisoned, activists claim.

"We see really only one benefit to the country, and that's for the sugar companies," said Eang Vuthy, of Equitable Cambodia, an NGO supporting the estimated 3,000 families who have lost land or community forest due to sugar concessions. "There are very few jobs at the plantations, the conditions are bad and the work is cyclical. This [deal] is actually making the people poorer."

The company would not confirm how it sells that sugar on to its customers. But as Tate & Lyle is the EU's leading cane sugar producer, and cane sugar is a key component in retail and industrial goods, campaigners argue that Cambodian sugar probably ends up in many of the soft drinks, yoghurts, cakes and confectionery that we consume daily.

The Guardian can also reveal that Cambodian sugar may have been sold in the UK over the past two years as Fairtrade sugar. This is due to a loophole in the Fairtrade Foundation's regulations that allows sugar to be exempt from "physical traceability" requirements because of processing costs. Fairtrade sugar is sold under a "mass balance programme" whereby the amount sold to the public is equivalent to the amount bought from Fairtrade farmers.

"Every product that is made with cane sugar in the UK is likely to contain at least some traces of Cambodian sugar," said David Pred, of the Campaign for Clean Sugar, which is calling for consumers to boycott Tate & Lyle. "We call upon Coca-Cola, Pepsi, Cadbury and other major sweets retailers to disclose to the public where their sugar comes from. If it is Tate & Lyle sugar, then they should switch to another source if they want to maintain an ethical supply chain."

Pressure is mounting against the sugar companies. After investigating claims of abuses on the Koh Kong plantations last year, a preliminary report from the National Human Rights Commission of Thailand stated that KSL had breached villagers' "right to life and self-determination" and told the Guardian that KSL had caused the "suffering and starvation of villagers [due to relocation to] limited plots of lands".

After villagers took their case to Cambodian courts and the UN office of the high commissioner for human rights, the European parliament adopted a resolution calling on the commission to "investigate the escalation of human rights abuses in Cambodia" related to agricultural exports to the EU. In March, parliamentarians urged the EU trade commissioner Karel De Gucht to call for "an immediate and inclusive investigation into these serious human rights abuses related to … agricultural goods being exported to the EU", with the possible suspension of the EU's preferential treaty with Cambodia.

But Jean-François Cautain, the EU's ambassador to Cambodia, said that while allegations of land-grabbing and human rights abuses are taken seriously, "launching an investigation is not a step to be taken lightly", as the review would need to look at all exports, not just sugar, the conclusions of which would apply to every export.

"The contribution of EBA to the socio-economic development of Cambodia … should not be overlooked," he said. "Trade preferences in themselves are not the cause of human rights abuses in Cambodia … and withdrawing preferences could be a 'lose-lose' game for Cambodia, putting a brake on job creation and human development."

If the villagers are successful in their claim, this case could send a strong message to multinational corporations that the business practices of their suppliers have far-reaching repercussions. European governments may also be expected to do more to protect consumers from being complicit in alleged human rights violations in foreign countries.

Most importantly, say campaigners, a victory would strengthen a sector of Cambodian society that has felt voiceless and powerless for far too long.

"I'm poor and not knowledgeable, and have been threatened by district and other provincial officials to not talk out, to not protect others and to remember I'm at risk of being evicted at any time because this land now 'belongs' to the company," said Yoen Sarin, as she looked out at the sugar plantation that replaced her crops.

"As long as the company gives us our land back, we won't protest any more."