For the past decade, the corn farmers of this village in southern Guatemala managed to scratch out two harvests of maize a year from the 10 hectares (24.7 acres) of land they rent. But the crop they planted in May will be their last. 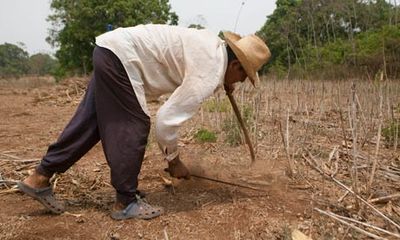 Priced out … Guatemalan farmer Victor Manuel Vasquez tends his land. Industrial plantations are affecting livelihoods. (Photo: Juan Manuel Barrero Bueno/Oxfam)
"We no longer have land to grow on because the owners of the land told us that this will be our last harvest there," says Moisés Morales, president of the Amanecer farmers' association. Sugar cane growers, they were told, had offered double the rent that the corn growers paid. The corn farmers couldn't match the price.

The plots farmed by the Amanecer members used to be among thousands of corn farms in the municipality of Taxisco. Today they are surrounded by a sea of sugar cane fields. Most small plots have been bought up and crowded out by expanding cane farms. Many corn farmers have left the area for the low foothills of nearby mountains "where cane harvesting machines can't go", says Morales.

"We're being surrounded bit by bit," he says. "We're like on a small island in the middle of all this cane."

Farmers are trapped in a land rush in Guatemala, which has one of the most unequal land distribution structures in the world. Before the spike in demand, 78% of Guatemala's arable land was in the hands of 8% of the population, according to government statistics from 2003. The trend since has been concentration of land by sugar cane and African palm companies aiming to meet demand for biofuel in Europe and the US, says Laura Hurtado, an agrarian expert with Oxfam.

Some progress on land reform was made after the end of Guatemala's civil war in 1996, when peace deals included an agreement to promote the democratisation of land structures and reverse the concentration of land. But an estimated 46% of smallholders who were granted land titles after the peace accords no longer hold them, according to Hurtado.

"It's terrible to see that, 15 years after the peace accords, the little that was won has been lost," she says. Many farmers are selling their land because of unpayable debt or crops failure – and sugar and palm companies are snapping up the bargains. Often, farmers are coerced into selling when they see their access to roads or water cut off by encroaching plantations. Others are threatened outright.

Palm and cane plantations are expanding in areas where lands have been newly titled. "The fact that newly titled farmers go into debt to plant their crops makes the lands more vulnerable to be appropriated," says Hurtado, who points out that maps of newly titled land and palm and sugar plantations overlap at many points.

Sometimes, things get violent. In 2011, more than 750 families were forcibly evicted in the Polochic valley in northern Guatemala because the owners of a sugar refinery claimed ownership of land that had been occupied by landless peasants after lying fallow for several years.

The Polochic area eviction has come to symbolise a broader struggle for land by smallholder farmers. According to the secretariat for agrarian affairs, more than 1 million people were involved in nearly 1,400 land disputes as of May.

Agriculture minister Elmer López, who has a background in development, says the government's official policy is to prevent the reconcentration of land, but that it lacks effective tools to do so. The agencies established by the peace accords to address land issues "did not receive enough support" from a succession of governments, which focused more on promoting agribusiness for export than supporting domestic food security. In addition to Guatemala's main export crops of coffee, sugar, rubber and bananas, the country exports cane and palm oil for biofuels, and baby vegetables for the US market. Cardamom, which is not used in Guatemalan cooking, is a major export product to the Middle East and India.

A rural development law that would have promoted better access to land, employment and other rights for smallholder farmers – but which stopped short of proposing all-out land reform – was thwarted in Congress last year amid opposition from large landowners and businesses that, according to López, had an "allergic reaction" to the proposals.

Paulo de Leon, director of investment consulting firm Central American Business Intelligence, says the bill was flawed because it "left open for the agriculture authorities to determine the use of land and the subject of ownership".

He questioned the need to help small-scale landholders in the first place, claiming that in 20 years 75% of Guatemala's population will shift to the cities, if urbanisation trends continue.

All the more reason, says López, for Guatemala to concentrate on rural development. "What's better: for a family to move to the city with dignity, and whose children have the skills to live well in the city, or for a family to arrive penniless with no skills other than an eternal hope that things in the city will be better?"

• Sibylla Brodzinsky travelled to Guatemala from Colombia, where she is based, on a reporting grant from Oxfam