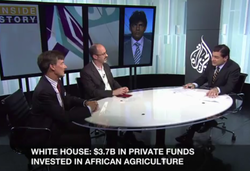 Inside Story Americas
Will the New Alliance help Africa's poor?

We examine the US-led initiative that hopes to lift 50 million Africans out of poverty and hunger over the next decade.

A year after the launch of a US-led initiative to lift millions out of poverty and hunger in Africa, we examine the New Alliance for Food Security and Nutrition.

The alliance was formed at the 2012 G8 summit led by the United States. Its stated goal was to reduce hunger and lift 50 million Africans out of poverty over the next decade.


The New Alliance ... has some merit to it, but the risk is that it becomes the only vehicle for investment and agricultural development. The frustration we've had is less about the New Alliance per se than about G8 leaders, other stakeholders basically, shifting the responsibility [of] agricultural development onto the private sector and not taking responsibility themselves.

Critics say this seemingly noble effort - among wealthy nations, African leaders and international corporations - to increase private sector investment in agriculture, is precisely the problem. Several NGOs and civil society organisations say this solution focuses too heavily on private investment and is the wrong solution to a complex and growing hunger crisis.

Among the concerns is that smallholder farmers could be pushed out of their land to make way for large, powerful international corporations.

Inside Story Americas spoke to Tjada D'oyen McKenna, the deputy coordinator for development for Feed the Future, an arm of US AID that is coordinating the US involvement in the Alliance for Food Security and Nutrition. She explained the goals of the initiative, and argued that safeguards were in place to protect local populations.

"The New Alliance for Food Security and Nutrition is very simple, it basically aims to bring together African governments and the citizentry ... to work together to sustainably, and in an inclusive way, reduce poverty and undernutrition in African countries.

"Countries have signed on to it ... as well as individual companies ... the majority of them being local African companies and international companies .... The parties ... have agreed to abide by international standards ... the fact they have signed on and are working in an open transparent manner helps to make sure that we continue to reverse those processes and be in discussion to make sure that we get to get outcomes for all parties," said McKenna

Nine African countries have now joined the alliance. Malawi joined this month along with Benin and Nigeria who joined earlier in the year. In an op-ed in The Guardian, Malawi's president Joyce Banda said the programme's private funds were essential for lifting her country out of poverty.

"The New Alliance is important as my government doesn't just view agriculture as an essential means to attaining household and national food security; we see it as a business through which our farmers can generate wealth, improve their livelihoods and transform Malawi's economy. None of this can be achieved without private sector investment," said Banda

To discuss the issue in more detail on Inside Story Americas, presenter Shihab Rattansi is joined by guests: Raj Patel, a writer, activist and academic, and adviser to the United Nations special rapporteur on the right to food; Gawain Kripke, a policy and research director at Oxfam America; and Michael Klosson, the vice president of policy and humanitarian response at Save the Children.


"I dont think [the New Alliance will work] ... in so far as it concentrates on increasing food production ... The reason for hunger is not a shortage of food but poverty. And without specifically addressing poverty, particularly without addressing women's poverty, what this initiative is doing is essentially paving the road for large businesses, whether African or international, to be able to have African resources in the African market, rather than addressing the reason why people are poor in the first place."

- Raj Patel, writer, activist and academic, and adviser to the UN special rapporteur on the right to food