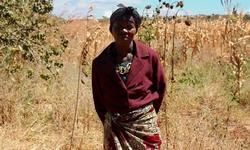 Mawalima Yamba stands in front of her stretch of poor land. But title deeds secured her access to much better land. Photograph: Jessica Hatcher
The Guardian | Thursday 20 June 2013

Tanzania is a test case for the G8's food security alliance. But will the millions invested by agribusiness really support independent farmers and their need for tenure?

Mawalima Yamba, 62, shared her husband with another woman. As the second wife she didn't stand to inherit much. When her husband became terminally ill and died, she inherited a small stretch of poor scrubland that borders an unfinished road in Iringa, western Tanzania; the fertile land went to his first wife.

There was a separate area of land that Yamba had farmed, but never expected she could own. Encouraged by her husband before he died, she applied for legal ownership. Yamba now holds title deeds to a six-acre plot of good land, where she grows pumpkins and maize.

Holding land deeds is rare in Tanzania. According to the NGO Concern, less than 10% of the population have formal certificates of ownership for the land they farm, making them vulnerable when investors begin sniffing around. Land titling means fair compensation must be paid if land belonging to individuals is appropriated. About 80% of Tanzanian land is classified as "village land" and cannot be sold to outsiders, but only 70% of communities on that land have official plans related to its use, says Concern.

Tanzania is a test case for the new alliance for food security and nutrition, an initiative launched at the G8 last year by US president Barack Obama. The scheme champions the private sector to achieve agricultural growth and lift 50 million people out of poverty by 2022. More than 40 multinationals, including Unilever, Diageo and SABMiller, have signed up to the alliance, and will invest millions of dollars in the nine African countries that have joined.

In Tanzania, G8 member states will support the government to implement the agriculture and food security investment plan. This will include mediating and attracting commitments from the private sector, and annually reviewing performance.

A key focus is the southern agricultural growth corridor of Tanzania (Sagcot), an area covering about a third of the country, earmarked for attention by the government in 2009 to develop its agricultural potential. The corridor stretches from Dar es Salaam in the east to Morogoro, Iringa, Mbeya and Sumbawanga heading west.

While the alliance could give a much needed boost to the area – 20 years ago, Iringa was the breadbasket of Tanzania – there is concern that smallholder farmers could be pushed off their land to make way for large-scale, business-backed programmes.

There is no doubt that agriculture in Tanzania needs urgent attention. About 75% of the population of 46 million people are small-scale farmers, according to the African Development Bank. Like Yamba, these farmers rely on their land for income and food, but only 6% of the government's budget is spent on agriculture.

There is a widely held view that Tanzania has plenty of available land. And it did, until the population exploded. Between 2002 and 2012 the population increased by 30%. President Jakaya Kikwete has warned that if population growth continues at the same rate, the country will struggle to provide basic services by 2016 due to "resource scarcity".

Much of the land not being used for agriculture in Iringa lacks access to water. There is a large underground aquifer that could provide supplies, but it would take a huge investment to get it working.

"Tanzania needs a revolution in its agriculture – but all the pieces needed, such as land tenure for smallholders, are not yet there," says Concern's country director, James Davey.

In Iringa, lack of information about which land will be targeted is fuelling speculation about "grabs", says Concern's deputy country director, Burton Twisa, who says local people need real information on what land is being targeted and which crops will be grown.

Concern educates people on the importance of land titling. When modern title deeds were introduced in 2001, many people couldn't understand why it was necessary as families had lived on their land for centuries. But, since 2000, African land has been increasingly targeted by investors. Almost 5% of the continent's agricultural land was bought or leased by investors between 2000 and 2010, according to estimates.

"Even on the boundaries there's no land not owned," says Emmannuel Nyang'uye, chairman of the village land committee in Ilabiole, Iringa. The population in Nyan'uye's village was less than 1,500 10 years ago. He says it is now more than double.

In Kimande, 70km north of Iringa, the only spare land is reserved for forests, and even parts of that are being chopped down, according to Philbert Kihango, the village's most senior official. He says he doesn't understand Sagcot but hopes to improve yields with machinery, a move he says people would support.

While farmers are happy to be given new tools, most do not want to give up their independent way of life – or their land. "Wages will not sustain you in the long term," says Abasi Kalesi, from Kimande, where he owns land along the Ruaha river that is rich in nutrients for growing rice.

Kalesi would happily be contracted to supply rice to larger firms through Sagcot. He'd like to see storage facilities, improved infrastructure, better seed quality, access to markets and marketing techniques. But he would not be happy to sell his land.

Sagcot has yet to roll out in any of the six clusters identified two years ago. But the people of Iringa are expectant. Yamba has been warned by her local MP not to accept any offer by an investor for her "worthless" roadside scrubland. When the new road from Iringa to Dodoma is finished, it could be worth a fortune, he says.

• Jessica Hatcher's travel in Tanzania was paid for by Concern Worldwide