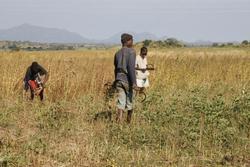 The UN passed a series of voluntary guidelines to prevent land grabbing and protect small-scale farmer's rights a year ago. But so far the rules haven't had much impact on foreign investors buying up land.

Joseph Rahall's heart breaks when the last people leave a village in Sierra Leone. Investors will come in and buy the fields to create massive plantations, and residents end up without a means to support themselves, so that they only stay in the village to sleep - not to live or work.


Some residents find work with relatives in a nearby village, says Rahall, an environmental activist, while others leave to try their luck in cities, where poverty and unemployment rates are high. What remains behind, Rahall said, are empty villages and massive, monoculture fields of palms.

"People can't go there any more to hunt, to farm or even to fetch firewood - the land is no longer theirs," he said.

It's typically foreign investors who engage in such "land grabbing" - forcing local farmers and fishermen off their fields, rivers and lakes. Some 50 million hectares (124 million acres) of land have been bought or leased by foreign investors since 2000, according to German Development Minister Dirk Niebel.

Such investments can makes sense in some cases, but "they cannot be allowed to lead to people being robbed of their rights or that people starve and watch as food is produced for export as biofuels," Niebel said.

One year ago, the UN created an instrument to prevent land grabbing: "The Voluntary Guidelines on the Responsible Governance of Tenure of Land, Fisheries and Forests." The product of three years of discussions, the guidelines sets detailed minimum standards for investors regarding the involvement of people affected by land purchases, the protection of the rights of indigenous people and methods of preventing corruption.

"The document is an important contribution for all those who are fighting for their rights," said David Nabarro, the UN secretary-general's special representative for food security and nutrition; the guidelines would particularly support small-scale farmers.

The guidelines, however, can be daunting for people who are not familiar with their intricacies, according to Mary Mubi of Zimbabwe's permanent mission at the UN's Food and Agriculture Organization in Rome, who played a role in drafting the document. She said the guidelines needed to be "simplified and explained" to make them understandable to the people in villages whose rights they address.

But others doubt that the voluntary guidelines will achieve much at all, since they require governments to decide for themselves whether they should be enacted into law and enforced. An activist from Bolivia, who requested anonymity, was skeptical, saying that while his country had laws on the books to prevent land grabbing, Brazilian and Argentinian companies bought forests and turned them into soy and sugar cane plantations, sometimes with approval from corrupt government officials.

Rahall says he is convinced that he and other activists can use the guidelines to put pressure on governments. He and a group of environmental protection activists have created a network to inform people in Sierra Leone about their rights to their land using programs on local radio stations and local meetings. As in many other countries, people in Sierra Leone often do not have documentation to prove they have a title for their land. Local leaders often simply hand out the right to use land. The Sierra Leone Investment and Export Promotion Agency (SLIEPA) introduces foreign investors to local leaders but does not keep an eye on what's agreed. Rahall said he fears the local leaders are manipulated to pressure farmers into selling their lands.

He added that it was Indian and European investors looking to plant sugar cane and palm plantations who were the main land buyers. When a global food crisis drove up agriculture prices in 2008, foreign companies as well as national governments began investing in agriculture and biofuels, Rahall said, adding that, since the economic crisis land, has come to be seen as a secure investment.

As a result of foreign and government investment, some 6 percent of arable land in Sierra Leone's Pujehun District is farmed for food while palm oil plantations cover the rest, Rahall said: "When they stand up three or four feet, you realize the impact of diversity versus monoculture - you see how much monoculture has taken over this country."

Rahall added that guidelines needed to be implemented soon to prevent more land from being lost.

"We need to make clear to all of the stakeholders that time is not on our side," he said. "Otherwise too much damage will have been done."