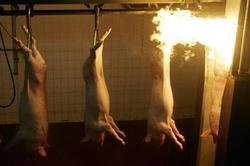 By Denny Thomas and Olivia Oran

(Reuters) - China's Shuanghui International plans to buy Smithfield Foods Inc for $4.7 billion to feed a growing Chinese appetite for U.S. pork, but the proposed takeover of the world's No. 1 producer has stirred concern in the United States.

The transaction, announced on Wednesday, would rank as the largest Chinese takeover of a U.S. company, with an enterprise value of $7.1 billion, including debt assumption.

As it stands. the deal is the biggest Chinese play for a U.S. company since CNOOC Ltd offered to buy Unocal for about $18 billion in 2005. The state-controlled energy company later withdrew that bid under U.S. political pressure.

Like similar foreign transactions, the Smithfield deal will face the scrutiny of the Committee on Foreign Investment in the United States, or CFIUS, a government panel that assesses national security risks.

And at least one member of Congress said the deal raised alarms about food safety, noting Shuanghui was forced to recall tainted pork in the past.

"I have deep doubts about whether this merger best serves American consumers and urge federal regulators to put their concerns first," U.S. Representative Rose DeLauro, a Democrat from Connecticut, said in a statement.

Shuanghui is already majority shareholder of Henan Shuanghui Investment & Development Co (000895.SZ), China's largest meat processor. It would join forces with a company that has a worldwide herd of 1.09 million sows, according to industry data compiled by Successful Farming magazine.

The CFIUS review process comes at a time of sour relations between the United States and China over cross-border deals. In the latest irritant, a $20.1 billion bid by Japan's SoftBank Corp to control U.S. wireless carrier Sprint Nextel Corp has fanned fears of Chinese cyber-attacks against the United States.

Shuanghui offered $34 a share for Smithfield, a 31 percent premium to its closing stock price on Tuesday. The Chinese company will assume $2.4 billion of Smithfield's debt.

Shares of Smithfield, founded in 1936 as a single meat-packing plant in Smithfield, Virginia, rose as high as $33.96 on Wednesday.

It is still possible that counterbids could emerge.

Smithfield was in talks with two parties about a potential bid before the takeover by Shaunghui was announced, according to a source familiar with the matter. Bloomberg earlier reported Thailand's Charoen Pokphand Foods and Brazil's JBS SA had been preparing to bid for Smithfield when Shuanghui struck its deal, Neither CP Foods or JBS could be reached for comment.

Smithfield has 30 days to continue talks with the two parties, but cannot solicit bids from others, the source said. If Smithfield decides to take an offer from either company, it will pay a lower-than-average, break-up fee under the terms of the agreement, the source added.

PROMISE OF NO DISPLACEMENTS

Aiming to dispel any concern over major displacements, Shuanghui has promised no closures or relocations of Smithfield's operations and to keep current management, including Chief Executive Officer Larry Pope, in place.

In the town of Smithfield, which the local visitors bureau describes as rich in "hams, history and hospitality," officials said they were shocked by the news.

"It was a total shock to us," said Smithfield Mayor T. Carter Williams, who noted that his wife has worked for the company for a decade. "Right now, I don't think anybody here knows what's going to happen...the people in China say nothing is going to change. We would hope so."

The agreement comes after Continental Grain Co, Smithfield's largest shareholder with a 5.8 percent stake, agitated for change, including a call to break up the company. Continental, could not be reached to comment on Shuanghui's proposal.

Pope said in a conference call with analysts that the company had been attempting to strike a deal with Shuanghui since 2009, long before Continental started its campaign.

"The Asian market is huge opportunity for us as a company," Pope said. "We just haven't been able to put something together until today."

Brian Bradshaw, a pig producer with operations in Illinois and Indiana who has sold hogs to Smithfield and its competitors, said the combination would boost U.S. pork exports. Still, he said he was worried about a foreign company owning Smithfield.

"Long term, I think it's not good to have foreign ownership, but that's just the American part of me," he said. "I just think this is a move by China to make sure their population is going to get fed in a cheaper manner."

The agreement highlights China's growing appetite for protein-rich food, particularly pork, the leading animal protein consumed there. As its middle class expands, the country is relying on foreign producers to keep pace with demand.

Demand for U.S. meat in China has risen tenfold over the past decade, fueled in part by a series of embarrassing food safety scandals, from rat meat passed off as pork to thousands of pig carcasses floating on a river. Public anxiety over cases of fake or toxic food often spreads quickly.

Shuanghui itself became embroiled in a scandal over tainted meat two years ago, when it was forced to recall its Shineway brand meat products from store shelves on fear that some of it contained a banned feed additive called clenbuterol.

In that respect, the Smithfield deal may help quell Chinese concerns over the use of ractopamine, a similar additive commonly used by U.S. hog producers to bulk up animals with muscle instead of fat, without increasing the amount of feed.

Smithfield has been trying to stop using ractopamine, which has been banned in China and Russia, an effort that could enhance its appeal as an exporter.

Privately owned Shuanghui will finance the transaction through a combination of cash, rollover of existing Smithfield debt and debt financing produced by Morgan Stanley (MS.N) and a syndicate of banks. Both boards have approved the deal.