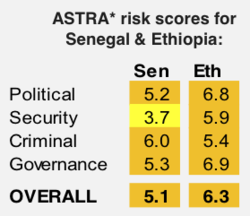 According to a report released by Reuters on 6 March, major asset managers are joining forces to alleviate the cost, risk and potential controversy of investing in international agribusiness, at the heart of which is the race for arable land in Africa. Of a global availability of around 445 million hectares, 201 million hectares are in Africa. Between 2009 and 2011, about 60 million of these were leased by either foreign or private domestic companies. As outside businesses look for more land to exploit, the risks of land tenure disputes increase, leading to greater operating costs or, worse, the prospect of operations being suspended altogether. The response to such disputes by several African governments has brought some of these investments under particular scrutiny.

Conflict over land tenure rights between private companies, governments and local communities has risen sharply in the past decade, largely as a result of an uneasy coexistence between the formal land laws of modern African states and the more traditional claims by local communities. Large-scale land acquisitions often take place without prior consultation at a local level. When this occurs, the details agreed between host governments and foreign companies have sometimes not been fully explained to communities, resulting in conflict over land tenure rights. This has taken various forms, from non-violent protests by local stakeholders to legal proceedings against host governments and foreign companies and, ultimately, violence. In April 2012, for example, five workers on a project in western Ethiopia, run by the Saudi agribusiness Saudi Star Agricultural Development, were shot dead by unidentified gunmen, apparently in a dispute over land ownership rights.

While some foreign agribusiness companies have chosen to engage with local communities, often through increased social investment, others have opted to rely exclusively on host governments for resolution of these conflicts. In Senegal, for instance, the deployment of state security forces in response to protests led to civilian deaths in 2011 in Fanaye, which quelled the unrest but did not resolve the problems that led to it. Owing to the political sensitivity of the dispute, the government renegotiated terms with the company, SenHuile/SenEthanol, and has now relocated the project. In the case of the project run by Saudi Star in Ethiopia, further disruption and persistent negative publicity may ultimately impact on the chance of a successful resolution. Local resistance to the project is also likely to increase operating costs due to sustained disruption or asset damage, thereby reducing profitability.

Such resistance may reflect a fundamental lack of understanding, by both foreign companies and institutional investors, of the sensitivity of land tenure issues, particularly in Africa. Consideration of dispute resolution, as well as environmental, social and governance issues will also impact on the reputations of investors, with possible implications for share prices. As ratings agencies and risk insurers increasingly factor in land tenure risk to their premiums, investors need to be aware of the potential costs that might be incurred through disruption, sabotage or loss of assets and the further possibility that the strong-arm tactics used by some African states to resolve disputes could invalidate or seriously impact on the level of insurance cover.

There are measures investors can take to mitigate these risks, but these require a good understanding of the dynamics on the ground and particularly at a local level. Foreign companies venturing into the sector may be able to work the potential for disruption caused by land disputes into their cost forecasts. It may be more effective, however, to opt for greater community engagement at the outset and to promote schemes that incorporate small farmers into their agriculture development projects. This engagement with local stakeholders, obvious as it may seem to sophisticated investors, is often the vital missing ingredient in agribusiness ventures, particularly in Africa. Investors are well advised to ensure that this has been given its due attention.

* The risk scores shown here are taken from the Aegis Strategic Risk Assessment (ASTRA) system. For background information on ASTRA, please see the second page of this report or visit www.aegisworld.com/advisory/strategicrisk