The view that increased crop production is the strategy most likely to achieve global food security could in reality allow farmland to encroach on valuable ecosystems, have a disastrous impact on forests and might not solve food security and nutrition problems, scientists say. 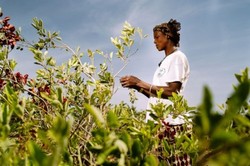 U.N. data indicate that the global population will rise from 7 billion to more than 9 billion by 2050, increasing the already high rates of deforestation in tropical regions and exacerbating threats to health. (Photo: CIFOR/Olivier Girard)

“A rampant increase in agricultural production as global population increases could encroach on nutritional food sources found in forests,” warned Terry Sunderland, a scientist at the Center for International Forestry Research (CIFOR) and one of the authors of the paper.Further research is essential for understanding the full impact forests and tree-based agricultural systems have on dietary and nutritional needs for at least 1 billion people whose livelihoods are directly affected by forests, the scientists said in a discussion paper released ahead of the International Conference on Forests for Food Security and Nutrition hosted by the U.N. Food and Agriculture Organization (FAO) in Rome.

“It’s not about production, it’s about equity, distribution, purchasing power and food waste,” he said, citing a report by Randy Stringer, a professor at the University of Adelaide who made a lasting impact when he argued in 2000 that the world produces adequate food for all.

U.N. data indicate that the global population will rise from 7 billion to more than 9 billion by 2050, increasing the already high rates of deforestation in tropical regions and exacerbating threats to health.

In 2012, U.N. food agencies estimated that at least 870 million people go hungry – a number revised down from previous years – and that more than 2 billion suffer from micronutrient deficiency, or “hidden hunger.” At least 1.4 billion people are obese, overweight, many suffering from such related non-communicable diseases as diabetes and heart problems.

Food from the forest, including wild birds, rodents, and larger animals, as well as leaves, stems, fruit, mushrooms and nuts, are a source of micronutrients for many rural communities.

Emerging evidence in Africa indicates people living in areas with significant tree cover eat more fruits and vegetables, according to CIFOR research. Communities also fall back on forests for food at times of low production in agricultural systems, Sunderland said.

Consumption of such iron-rich forest foods as vegetables and bushmeat could help fight iron deficiency, which affects 2 billion people, according to World Health Organization (WHO) data, and can impair growth and cognitive development, negatively affecting school performance and work productivity.

Many fruits and vegetables obtained from forests and fallows are rich in vitamin A and calcium, helping to counter vitamin A deficiency, which according to WHO causes an estimated 250,000 to 500,000 children to become blind every year, half of them dying within 12 months of losing their sight.

“Using natural systems, even people living in poverty can have good diets,” said Sunderland, citing a recent study by CIFOR scientists that says wild foods from a forest farm in Tanzania contributed 31 percent vitamin A, 26 percent iron and 23 percent calcium to local diets.

“We always presume that poor people have terrible diets, but the reality is that you don’t need to be wealthy to have a good diet and a healthy lifestyle.”

Most of this agricultural expansion is speculated to come at the expense of forests and other treed areas, due in part to a prevailing view that increased food production should be pursued regardless of the cost to the natural environment. This approach overlooks faults in the existing food supply system, including over consumption, waste, post-harvest loss and unequal distribution.

“We have a number of tools that can contribute to global food security — integrating forests and trees into agriculture is one of them. Trees and forests play an important role in supporting agriculture.”

Further research will help scientists gain a better understanding of how forests can contribute to a food-secure and nutrition-sensitive future, a project vital for minimizing trade offs between biodiversity conservationand sustainable agriculture, he added.

This work forms part of the CGIAR Research Program on Forests, Trees and Agroforestry.