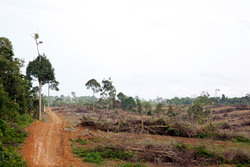 A Moody International investigation found that PT Borneo Surya Mining Jaya, a unit of Singapore-based First Resources, failed to obtain free, prior and informed consent (FPIC) from villagers in Muara Tae in Indonesia’s East Kalimantan province before clearing forests there, the Indigenous Peoples Alliance of the Archipelago (AMAN) said in a press release on April 19. This failure to obtain consent, the report found, is a root cause of the ongoing conflict between the company and the Dayak Benuaq community in Muara Tae, which has been protesting the plantation for over a year.

Moody also found that the company had cleared 622 hectares of land in the area without complying with the RSPO Procedures for New Plantings (NPP) and 579 hectares without first undergoing a high conservation value (HCV) assessment.

In a letter to First Resources on April 17, the RSPO ordered the company to stop all activities in Muara Tae until the conflict with the community was fully resolved, AMAN said. The RSPO had earlier ordered a similar suspension of activities in December last year, upholding a complaint filed against the company by the Muara Tae villagers along with the London-based Environmental Investigation Agency (EIA) and AMAN.

The independent investigation by Moody, which was carried out in March, was commissioned by the RSPO as part of its ongoing investigation into the case. The RSPO is a multistakeholder body established in 2004 to address social and environmental problems associated with palm oil production. Member companies are expected to comply with a set of standards designed to minimize damage to the environment and communities in their operations. Failure to comply with these standards can result in a company losing its certification.