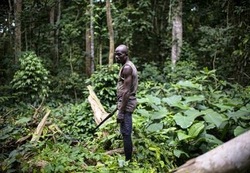 In a forest near the village of Ngon, District of Ebolowa, Cameroon. (Photo: Ollivier Girard/Center for International Forestry Research)

Inhabitants of Adjap, a largely deprived hamlet nestled deep in the heart of the tropical rainforests of southern Cameroon are living life on the margins. Over the years, its roughly 2,000 denizens have watched their ancestral forest lands continually annexed by the government and ceded to foreign agribusinesses and logging companies.

“Our ancestors settled here in 1903. We considered the land ours until 1947 when the colonial government suddenly seized it as private state property, arresting anyone cutting down trees for firewood or to build”, explains Adjap tribal chief, Marcellin Biang.

Alongside thousands of neighbours in 17 adjacent villages, the Adjap natives have eventually been squeezed into a 14,000-hectare strip of land – less than a third of the near 50,000-hectare expanse they controlled under pre-colonial customary jurisprudence. They complain that the steady erosion of their tenure rights is having a disastrous impact on livelihoods.

In Akom I, chieftain Luther Abessolo says his subjects are increasingly lazy as a result of the prevailing tenure insecurity. “We live in utter uncertainty because the government can decide to seize our land at short notice anytime. Our people lack motivation to cultivate the land”, he tells Think Africa Press.

Similarly affected are some 32 aboriginal Bagyieli. They’ve been dislodged from their traditional forest environs and constrained to survive as misfits in unfamiliar village settings. “Before, we led normal lives, hunting and gathering medicinal plants for a living. But logging companies and agro-industries have destroyed the forests”, says pygmy community head, Martin Mba. Yet despite their despair, these groups are comparably lucky. Initially, the government appropriated all their lands for use by foreign investors. But three years of pressure from 2006, masterminded by local NGO Cameroon Ecology (CAMECO), resulted in the government backpedalling and retroceding a portion of land over which the Bagyieli now have some limited rights.

Less fortunate, however, are some 14,000 villagers in Cameroon’s southwest whose existence – as well as that of numerous endangered floral and faunal species – is under threat. US-owned agribusiness, Herakles Farms, is razing some 73,000 hectares of dense natural forests for a $600 million oil palm plantation despite local objections. Some locals have been arrested for protesting. Herakles officials say that the company has legitimately leased the land for 99 years, but Greenpeace insisted in February that the meagre 50 cents per acre per year rent to the government, the absence of a presidential decree authenticating the concession, pending lawsuits, and flawed environmental impact assessments, among other things, call the investment into question.

This is snapshot of battles being fought out across much of Cameroon. Hostilities have frequently erupted elsewhere between nationals and foreign firms, including Chinese agribusinesses growing rice, maize and cassava exclusively for their home markets.

Findings from research released in March by Rights and Resources Initiative (RRI) indicate that over 10 million of Cameroon’s estimated 22 million hectares of forest lands have already been committed to various concessions, and that some $18 billion has been pipelined for investment in the agribusiness, forestry, mining and infrastructure sectors in Cameroon.

From periphery to priority
Large-scale land acquisitions by foreign governments and investors – a phenomenon termed “land-grabbing” by activists – peaked following the 2008 global food price spikes. Governments and venture capitalists from the Gulf States, Asian tiger economies, EU and US rushed to acquire large terrains in developing countries to grow and secure food supplies for their populations and biofuels for expanding markets.

But the practice has been increasing for at least a decade. The Land Matrix Partnership estimates that 227 million hectares of land have been ‘grabbed’ worldwide since 2001. And according to the World Bank, 70% of the current demand for forest and arable land is concentrated in sub-Saharan Africa, with its vast parcels of “cheap” and “unoccupied” terrains. Liberia, for example, has reportedly sold off three-tenths of its territory in five years.

“Once seen as marginal, this issue has emerged as one of the development priorities of our different governments”, Cameroon’s Forestry and Wildlife Minister, Philip Ngole Ngwese tells Think Africa Press.

Indeed, across West and Central Africa, an escalating number of poverty-stricken men, women and children in rural areas are being chased off ancestral lands they have relied on for generations for farming, grazing and hunting. They are increasingly squatters and low-paid labourers for the incoming foreign investors and local elites.

“When the government takes this land and gives it out in a lease for 40, 50 or up to 99 years, the people often lose access to these commons resources”, Michael Richards, Natural Resources Economist with the UK-based Forest Trends, notes. “In some cases, they do allow access for the extraction of certain products. But in other cases, they put great fences which stop communities having access.” Land grabbers also usually obtain unlimited rights to water use, Richards adds, implying curtailed availability for downstream users.

Other experts warn of looming threats of hunger, stalled investments and political instability should the land deals continue to be shrouded in secrecy and corruption, lack of accountability and transparency, or negotiated without the informed consent of local communities.

On the other side of the argument, advocates of the large-scale land transactions claim they have the potential to improve local infrastructure and services, boost governmental tax revenues, create jobs, and enhance food and energy security. According to them, activists have been exaggerating the negative outcomes of large-scale deals and, by dominating coverage of stories around large-scale land deals, have given a false impression. “There could be a reporting bias in that many of these reports are put together by advocacy groups who want to show the negative effects”, says Richards.

However, even if this is the case, it does not explain away instances of human rights violations and the mass displacement of local communities and indigenous peoples.

Righting wrongs
One group at the forefront of a worldwide campaign to reverse recent land grab trends is Rights and Resources Initiative. The organisation has been pressing for government forest land policy reforms that recognise and restore land ownership rights of local communities. RRI warns the tenure crisis is worst in Africa, where only 0.4% of forest land is formally owned by local people, as opposed to around 24% in Asia and Latin America.

In 2009, the group summoned stakeholders from across the globe to rethink and propose better tenure rights governance for West and Central Africa at a conclave in Cameroon’s capital Yaoundé. Participating government representatives, related sub-regional institutions, NGOs and civil society organisations declared their commitment to lobby and double forest land areas under community ownership by 2015.

“We identified problems of deforestation, lack of respect for human rights and the crisis that was unfolding across the region. The meeting generated a lot of recommendations and governments made a lot of commitments about what to do”, says Andy White, RRI Coordinator.

But four years down the road, and only two years before the Objective 2015 deadline, not much has been achieved. Reports presented at a follow-up regional dialogue in Yaoundé in March indicate that only half of the 26 West and Central African countries revisited their tenure systems. And those that did only ceded feeble secondary rights to indigenous people, granting them access and usage privileges, but maintaining tight grips on stronger rights to exclude intruders or transfer ownership to a third party.

“There’s been some progress. Some governments in the region have initiated new land reforms, but the laws and policies they’re proposing are really inadequate”, says White. “The crisis has become much greater over the last four years than we expected and there’s been far too little action. [There is a] crisis in terms of loss of life, crisis in terms of the systematic destruction of the culture of the forest peoples like here in Cameroon. It’s just alarming.”

“We are calling on the support of RRI and other partners because we want to build a network of traditional rulers to constitute a lobby to defend our rights”, says HM Bruno Mvondo, bureau member of the Council of Traditional Rulers of Cameroon. “For us traditional rulers, the land belongs to the community. But in front of modern law, our customs don’t have any strength. We’re begging the authorities to take into account our traditional law.”

For displaced communities and global activists, the fight goes on and debates regarding who owns Africa's lands are gathering momentum. But at the same time, fresh findings suggest wealthy nationals and elites are keeping busy too and increasingly joining the rush for land.

Think Africa Press welcomes inquiries regarding the republication of its articles. If you would like to republish this or any other article for re-print, syndication or educational purposes, please contact: [email protected]