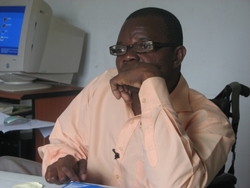 Marc Ona Essangui, Executive Secretary of Brainforest NGO, Coordinator of Publish What You Pay Coalition in Gabon, and Coordinator of Environment Gabon.

2009 Goldman Prize recipient, Marc Ona Essangui is facing possible jail time and a fee of nearly $10,000.00 US after being convicted of defamation by a Gabonese court last week.

Ona, Executive Secretary of Brainforest NGO, Coordinator of Publish What You Pay Coalition in Gabon, and Coordinator of Environment Gabon, is one of central Africa’s most prominent environmental activists.

The charge was filed after Ona allegedly spoke out against possible government corruption involving Soleman Liban, a senior advisor to Gabonese President Ali Bongo, and Olam Gabon, a foreign agricultural company that operates in Gabon.


Ona’s lawyer Ruphin Nkoulou confirmed the conviction to Reuters last week, saying “I regret this decision against my client, who was only fulfilling his role of a counterweight [to the government]. I will consult with my client and possibly appeal this decision.”

Ona was awarded the Goldman Prize in 2009 for his efforts to publicly expose the unlawful agreements behind a huge mining project threatening the sensitive ecosystems of Gabon’s equatorial rainforests.

The following is a personal message from Mr. Ona:

“It's important to know that my commitment is to stop the destruction of our forest and all biodiversity by Olam, a Singaporean company, to plant palm trees and rubber. The members of the executive [government] are [giving] land to Olam without taking care of the right[s] of populations. The deforestation caused by this activity [has] accelerated since 2009 when Ali Bongo, the new Gabonese President, [gave] all power to Olam to cut trees [and] to plant palm trees and rubber. The denunciation I made is about collusion between the new President, his cabinet and Olam. They make intimidation on the populations to accept all projects by Olam. It's not normal. The corruption of the executive members [of government] is about influence they make to [pressure they put on] the rest of the people to accept Olam project. I am fighting again the situation and we need all the network of Goldman Prize to join us by denouncing Olam activities in Gabon and the collusion with the members of the executive power in Gabon.”

To show your support for Ona and his urgent situation, Ona asks you to consider sending a message to your local elected officials, or directly to Ali Bongo, President of Gabon ([email protected]) and to Liban Soleman, the Chief of Cabinet ([email protected]).

Please check back soon for news and updates on Ona’s case, including the Goldman Prize recipient petition.