'Quick-fix' development gives away more than it gets back

Rather than giving away land and resources to companies to the detriment of their citizens, African governments must respect the rights of citizens and "let them negotiate with investors on their own terms" [Reuters]

In Cameroon, as in many African countries, the question of economic development is not just an abstract concept. Rural communities, mostly consisting of subsistence farmers struggling to feed their families, welcome the possibility of brighter prospects.

But instead of leading to greener pastures, economic development too often consists of large-scale projects that take away property and community land, leaving farmers with little compensation. Their governments - often the ones who sold the land - either look the other way or play the role of enforcer. If the communities are compensated, it is hardly adequate, and the few resulting jobs do not pay enough to make up for the permanent loss of livelihood and way of life. 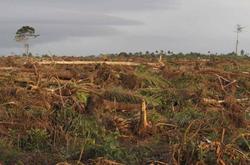 Rather than giving away land and resources to companies to the detriment of their citizens, African governments must respect the rights of citizens and "let them negotiate with investors on their own terms" (Photo: Reuters)
In Southwest Cameroon, for example, New York-based Herakles Farms plans to clear 73,000 hectares for an oil palm plantation that the local communities are protesting. Once the land is cleared of their crops and the surrounding forest, they will have nothing - and nothing to lose by contesting this development.

Yet the financial media is full of reports of new large-scale land transactions. An aluminium mine in Northern Cameroon, supported by a hydropower plant and two railroads, would bring the country $4bn in investment from companies in the US, Dubai and India.

An iron mine in Southeast Cameroon, being bought by a Chinese firm planning to build port facilities and a railroad, would bring $4.7bn into the country.

And an even bigger oil palm plantation, developed by an Indian conglomerate, is expected to transform the landscape of over 200,000 hectares, a development worth more than $1.7bn.

The desire for these projects is understandable: the world needs more minerals and food, governments need revenues, and local people want jobs. But by encouraging such investments and thousands more like them around the world, governments are giving away land that belongs to the people who live on the land, determining their future with neither consultation nor consent.

This has become known as the "land grab", but it might be better called the "great land giveaway". Governments, eager to capture the cash promised by large-scale agriculture, timber, or mining operations, all too willingly hand over their only resources to large multinational corporations to catalyse development. But in reality it is not the "quick-fix" they were hoping for.

Instead these projects often trigger community resistance, and governments often respond to those standing in the way of these deals with an onslaught of legal harassment, violence and worse. For example, after objecting to the actions of Herakles, the palm-oil producer, Nasako Besingi and four other Cameroonian advocates were jailed for three days in November 2012. Other activists have faced longer prison sentences. Fa'a Embolo, a village leader from Central Cameroon, spent four months in jail; in other countries they have been beaten and killed.

These stories are repeated across Africa, as weak governance and a lack of legal recognition and support for customary rights continue to inhibit any real progress.

Michael Richards, a natural resources economist, authored a report recently for the Rights and Resources Initiative, examining 18 large-scale African land acquisitions in the agriculture sector. He concluded that the local communities had been lied to, subjected to coercion or political pressure, or tricked with documents that were either falsified or misleading. In 17 out of 18 cases, Richards said, local communities would have said no to the land transfers, if they had been given the information needed to make an informed decision.

But the communities and their defenders are not alone in facing risks. After the inevitable pushback from the communities whose land has been sold out from under them, a growing number of investors have lost more than they have gained. This financial risk is completely underestimated and underreported despite the widespread havoc it can wreak on corporate balance sheets.

One of the world's largest palm oil producers, Sime Darby, was forced to suspend the development in 2012 of a planned 220,000-hectare oil palm and rubber plantation in Liberia because of protests on the part of local communities that claimed the land under customary law.

In Cameroon, by clearing rain forest and other illegally occupied lands and then arresting protesters who trespass onto the land, palm-oil producer Herakles has become the subject of a global advocacy campaign that has tarnished its reputation. The impact on the company's bottom line has not been assessed, but the project delays do not come cheaply.

And the story does not end in Africa.

In India, Vedanta's failed aluminium mining venture led to a negative financial outlook rating from Standard & Poor's and other agencies. In Chile, a failed hydropower project forced SN Power to write off $23m. And in Bolivia, a failed highway project cost the national government a $332m development grant from a Brazilian development bank.

The assumption behind such investments is that they will provide rapid growth in the host countries. While in some ways effective, this "quick-fix" development exacerbates a growing gap between the rich and the poor and multiplies the risk of conflict.

These land-based conflicts could well begin to take the glow off the investment picture for the companies involved and those that finance them. But the growing appetite for land - and the growing speed of land acquisitions - means that tenure problems and the financial risks associated with them are not going to disappear.

Rather than giving away land and resources to companies to the detriment of their citizens, African governments - Cameroon included - must respect the rights of citizens and let them negotiate with investors on their own terms. And the companies themselves should be asking who owns the land they obtain on such good terms.

To do otherwise is ultimately too high a risk, not just for advocates, but also for investors, communities, and the governments themselves.

Samuel Nguiffo is the Secretary General of the Centre for Environment and Development (CED), Cameroon. He is currently being sued by the government of Cameroon for tarnishing the state's reputation when he advocated against an oil palm plantation concession.

The views expressed in this article are the author's own and do not necessarily reflect Al Jazeera's editorial policy.