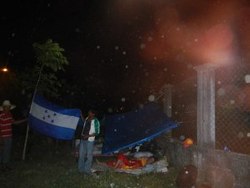 In the morning on 20 March 2013, around 150 soldiers and police illegally evicted farmers organised in 15 cooperatives of ADCP (Association of Development for Farmers of El Progreso) and 14 cooperatives of CNTC (National Farmworkers Federation), who have been recovering state agrarian at Agua Blanca Sur from 16 February 2013 in El Progreso, Yoro. The eviction was illegal because the executor judge Enia Loreny Aguilera of El Progreso Court gave the eviction order, despite there being a protection appeal in process in court that stops such actions until a resolution is reached and confirmed.

Each time the families tried to recover the land, their occupation has been followed by eviction (in July and August of 2012, and now March 2013) in favour of Azunosa, despite, the state decision made in the first half of 2012 by INA (National Agrarian Department) to expropriate 5227 manzanas of land from Azunosa, of which the farmers have recovered 1090 manzanas. Before that there was an agreement between Honduras and UK that is now expired. Azunosa is of the transnational SABMiller, which has also a franchise to produce coca cola there. The company has been illegally occupying and exploiting these lands for sugar cane production for decades, having gone beyond legal ownership limits sobretechos (3).

The farmers are determined to recover what is theirs, and when they saw demolition equipment of Azunosa move in together with dozens of security guards, farmers returned to occupied 4 hours after having left when the state forces asked them to. Hours later, some 200 police returned ready to repress and throw teargas bombs, stopped only by a court order to suspend the eviction (3).

While it was the destruction of the crops that the farmers feared most, around 50 make-shift homes and belongings that farmers did not managed to remove within an hour of the initial eviction were gathered and burned.

In relation to the illegal eviction, complaints have been made to the police, armed forces and courts.

Feliz Torres, a leader of Renacer 1 de Mayo, which is one of 15 cooperatives organised under ADCP, denounced on the evening of 21 March 2013 that he just received news of plans to assessinate him. His daughter told him that her friend knows that a meeting took place in the Azunosa company, and passed the message through the daughter to Felix, ‘to be careful, because you are amongst the people they want to assassinate.’

He said if any attempts is made against him, Azunosa is responsible.

Harrassment and persecution by security guards

A group of farmers complained that since the eviction, there is harrassment by guards. They said they are always nearby, trying to intimidate, and that they are often accompanied by the police. They said, every now and then, people from the company take photos of farmers with cameras, including hidden cameras.

Standing their ground for food sovereignty

The farmers of Renacer 1 de Mayo said they have been organising for 3 years, to recover the land. Apart from plans to develop a banana plantation when they have secured the land, the farmers spoke of the corns and different vegetables they have cultivated that form part of their diet – including cabbage, carrots, onions, and tomatos, to replace the sugar cane fields that feed the markets.

Currently the communities have their land title cases in court.