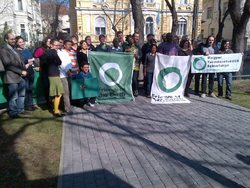 La Via Campesina, Transnational Institute, World March of Women and some other organizations also attended at the Food Sovereignty Programme meeting of Friends of the Earth International held in Budapest between 5 and 8 April. At the end of the meeting the participants approved a statement supporting the struggle against land grab in Hungary.

We, the undersigned organisations who represent millions of grassroots communities, women’s organisations and small-scale farmers across the globe support the struggle against land grab in Hungary.

Access to land, including control of how it is used and for what purposes, is for local farmers a key element of food sovereignty. Therefore we are very concerned by the alarming rate of land grabbing happening world wide. We recognize that land grabbing is not only happening in the Global South but also in Europe.

We have learned that according to estimates around 1 million ha of land in Hungary have already been grabbed by foreign investors via so called "pocket contracts" and hundreds of thousands of hectares by companies or Hungarian landlords via the leasing of state owned land. The planned new land tenure act submitted by the Hungarian government to the parliament would further accelerate land grabbing and concentration of land unless the draft law is changed by amendments that are supported by almost two hundred civil society groups and farmers' organizations.

Therefore we support the struggle of the Hungarian food sovereignty movement and their demands in the struggle against land grabbing:
- Local communities should have the right to control land and natural resources.
- The Accession Treaty between the EU and the new member states (including Hungary) should be reviewed and the chapter about opening up the land market in the accession countries should be deleted.
- The Common Agriculture Policy and the energy policies of the EU should be reformed to ensure that EU subsidies (eg. territory based subsidies or agrofuels/biomass subsidies) and the renewable energy targets (including agrofuels targets) won't lead to land grabbing.
- All possible “pocket contracts” should be explored by the government and should be invalidated before the expiration of the land moratorium.
- The proposed land tenure act should be changed in a way that it serves the local and small farmers instead of the big investors and agribusiness. The remaining potential loopholes for “pocket contracts” should be closed.
- An independent review of the leasing of state owned land must be conducted and the contracts that lead to land grabs must be cancelled. Instead the land should be given to local small scale farmers.
- Land use should serve local farmers and communities instead of agrobusiness