(Heidelberg, 11.04.2013) The High Court in Kampala, Uganda ordered that compensation in the amount of approximately eleven million euros be paid to the 2,041 evictees of land now occupied by the Kaweri-Coffee-Plantation, which is owned by the German Neumann Gruppe. 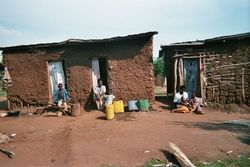 In the judgment dated March 28, the compensation is not demanded directly from the defendants themselves, but rather from the lawyers of the German investors and the Ugandan Investment Authority who had bought the land for Kaweri.  However, in his final remarks the judge harshly criticizes the German investors for abusing their human rights duty to due diligence.

In August 2001, the government of Uganda brutally evicted more than 2000 persons from their land in the Mubende District in Central Uganda. The land was given to the German coffee company Neumann Kaffee Gruppe (NKG) under its local subsidiary, which used the land to establish the first large-scale coffee plantation in Uganda. The legal action undertaken by the evictees to reclaim their land and properties has been continuously obstructed and delayed.  A documentary by German filmmaker Michael Enger illustrates the decades long struggle of the evictees of Mubende.

The judgment clearly condemns the irresponsible acts of the Kaweri-Coffee-Plantation: “The German investors had a duty to ensure that our indigenous people were not exploited. They should have respected the human rights and values of people and as honorable businessman and investors they should have not moved into the lands unless they had satisfied themselves that the tenants were properly compensated, relocated and adequate notice was given to them,” the judgment states.

Currently the judgment is under intense debate in the Ugandan media because the judgment has been mostly issued against the lawyers who were not parties to the case. Furthermore it is unclear why the judge would acquit the Ugandan government of all responsibility for the eviction carried out by the Ugandan Army, even though the officer in charge declared that the Resident District Commissioner, the regional representative of the government, had ordered the eviction.

“After a lawsuit that has lasted eleven years, this judgment is a milestone for the evictees of the Kaweri-Plantation,” says Gertrud Falk of the German section of FIAN International, which has supported the evictees in their peaceful struggle for justice since 2001 through a variety of actions. With this judgment the court granted almost all of the evictees’ demands. However, the demand to have their land restored to them was not granted.

All parties have declared that they will appeal against the judgment, with the evictees appealing the aspect of the case involving their land tenure rights and demanding restoration to their lands. FIAN will continue to support the evictees.