Gaining ground? Report sheds light on demand for accountability amid resistance to land deals in Africa 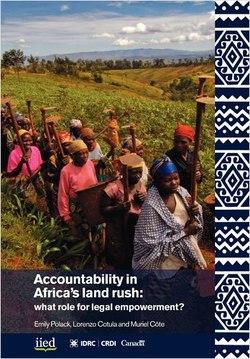 People who feel wronged by large scale land deals in Africa are taking a variety of steps to seek justice, according to new research that examines the accountability of public authorities that preside over such deals and asks whether legal empowerment offers citizens scope to expect fairer outcomes.

Dr Lorenzo Cotula of the International Institute for Environment and Development (IIED) will present the findings of the new report at a World Bank conference on large land deals in Washington DC on 8-11 April.

The research – published by IIED and the International Development Research Centre -- analyses legal frameworks in 12 African countries and reviews the cases of 16 large scale land deals.

Large scale land deals can bring benefits such as jobs, market access and infrastructure, but they can also dispossess people of land and other resources and can spark conflict over economic benefits. Part of the problem is that land deals are rarely transparent and that there is limited accountability on the part of the public authorities that decide them.

"We need to understand more about the accountability weaknesses in different contexts – such as the imbalances in legal frameworks and the ways in which political interests affect deals," says the report’s lead author Emily Polack of IIED. "We also need to understand what options citizens have to seek greater accountability – and how to strengthen the mechanisms they can use as well as their ability to use them."

The research assesses the effectiveness of different ways citizens respond when they perceive land deals to be unjust. These efforts include letter writing, requesting an audience with authorities, forming local associations to strengthen negotiating power, and using courts and other formal legal mechanisms. Demonstrations can follow if these routes fail.

The report shows too that few legal options are available to local groups and that there is an imbalance in the way laws protect investors, governments and communities. Meanwhile, many of the smaller land deals pass unnoticed, leaving even fewer options for redress.

"On one hand, international investment law is strong and offers great protection to investors who seek to acquire large areas of land," says co-author Lorenzo Cotula of IIED. "On the other, international human rights laws tend not to be very effective in protecting the rights of poor communities. Meanwhile, features of national laws provide the basis for rights and accountability but very often they legitimise abuses of power against the powerless."

The report explores ways that legal empowerment could improve public accountability through two complementary approaches – one that reforms national and international legal frameworks to increase local control and downward accountability, and one that increases citizens’ capacity to engage in policy processes, claim rights and advocate alternative visions of development.

"Improved public accountability is critical to democracy as it enables local people to voice their concerns about large scale land deals," says Adrian Di Giovanni of IDRC. "It discourages harmful investments and makes it more likely that everyone involved will gain from incoming investment."

IIED and IDRC will publish the report in both English and French. It will set out an agenda for future research on large land deals and accountability.