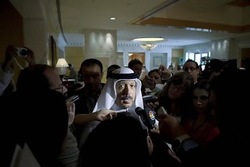 UAE's Minister of Finance yesterday called upon the Arab world to invest more than US$80 billion (Dh293.84bn) in agriculture to help to bridge a widening food gap.

Without investment to increase output, the shortfall in food in the region would rise from a value of $41bn in 2010 to $89bn in 2020, said Sheikh Hamdan bin Rashid, Deputy Ruler of Dubai and UAE Minister of Finance.

"Food security is one of the main challenges that Arab countries face, taking into consideration that Arab agriculture projects did not achieve predicted [levels of] increased productivity," he said at a gathering of finance ministers in Dubai.

Poor infrastructure, instability in parts of the region and lack of investment in scientific research were among the factors why agriculture projects in the Arab world were not achieving the targeted rises in production, he said.

Several countries, including Egypt, Tunisia and Iran, are battling with surging prices of bread and other basic items amid worsening finances and weak domestic currencies. The UAE and other GCC countries, meanwhile, have long relied on imports for up to 85 per cent of their food needs.

Food security was one of the topics officials discussed during the annual meeting of Arab Financial Institutions and fourth meeting for the Council of Arab Ministers in Dubai.
Unhappiness with rising prices of food and other living costs were one of the seeds sowing instability in the region more than two years ago. The challenge is expected to become even more pressing over the longer term as populations are forecast to more than double by 2030 from 1990 levels in some countries.

Sudan, the biggest food exporter in the Arab world, exports about $2bn of food each year including wheat, cereals, sugar, livestock, fruit and vegetables. Yet the country was producing only about 15 to 20 per cent of its potential capacity, said Abdelhalim Almutaafie, the minister of agriculture in Sudan.

"There may come a time when there may not be enough food in countries to feed people," he said.

"In the Arab world, food is especially a problem as we're in an area of shortage of water supply for production and for that reason governments are spending $40bn to buy food, which could rise to $60bn by 2030."

Sudan, Morocco and Algeria were among the few countries in the region with the capacity to help cut the food gap, he said. Such countries needed investment from the GCC and elsewhere

Despite an easing in global food prices in recent months, costs of basic items have pushed higher in several countries in the Arab world.

Fuel shortages in Egypt have driven up food prices as many farmers use fuel to power machinery for irrigation and harvesting, and it is also used to ship goods in. A slide in the value of the pound against the US dollar has also increased the cost of food imports.

In an effort to help tackle food security, officials yesterday agreed to double the capital of the Arab Authority for Agriculture Investment and Development, a multilateral lender aimed at promoting investment in agriculture.

"We are helping establish companies in the region in the private sector to produce sugar, oils and other goods," said Abdalla Jizeldin, a director at the organisation.

"Sometimes prices have gone up due to devaluation of currencies and increase in inflation. We have a double problem as prices have increased and there is a shortage of food, so the lower classes are squeezed."

The World Bank's Food Price Index showed international prices of wheat fell by 11 per cent, sugar by 10 per cent and corn by 6 per cent during the four-month period between last October and February.

However, global food prices are only 9 per cent below the record high recorded in August last year, the World Bank said.

"This means that despite sustained declines, international food prices remain very high and still close to their historical peaks," the World Bank said.

Food price rises in the UAE have remained relatively stable, partly as the dirham's peg to the dollar have helped to control the cost of imports.