Armenia: Do Iran’s sheep pose a threat to national security? 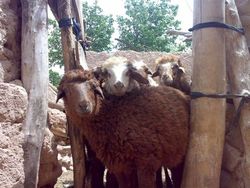 Under the terms of the deal, Iran will acquire a five-year lease on 52,000 hectares of land in the strategic, southeastern border region of Syunik for the use of Iranian shepherds from the neighboring province of East Azerbaijan.

Armenia: Do Iran’s Sheep Pose A Threat To National Security?

A pending agreement for Iran to graze sheep inside Armenia has sparked a furor among Armenian environmentalists and nationalists over whether or not the prospective deal poses a threat to the country’s national security.

Under the reported terms of the deal, Iran will acquire a five-year lease on 52,000 hectares of land in the strategic, southeastern border region of Syunik for the use of Iranian shepherds from the neighboring province of East Azerbaijan. In exchange, the government of East Azerbaijan will allegedly pay $25 per hectare (about $1.3 million) per year into the Syunik treasury for use of the land – about 11 percent of the region’s total territory – and supply Syunik with unspecified farm machinery. Iran will have the option to renew the lease for up to 10 years.

According to Iranian Ambassador to Armenia Mohammad Raisi, however, no final agreement on the sheep has yet been signed. The proposal was first outlined last autumn by Iranian media, which claimed that Syunik Governor Suren Khachatrian and the government of East Azerbaijan had signed a memorandum of understanding.

At a February 18 press conference in Yerevan, Ambassador Raisi estimated that the agreement, which requires parliamentary confirmation, could take “about a year” to be completed. Armenian officials, for now, remain mostly mum.

Nonetheless, the debate over the issue is only growing hotter, with both territorial and environmental-economic concerns at the forefront.

The Iranian shepherds who would graze their flocks in Armenia are mostly ethnic Azeris. Another 2,000 hectares in Syunik would be set aside for their residences, according to reports. Armenian nationalists fear that, at the end of the five-year lease, the shepherds, together with their families, will refuse to leave.

History plays a role in prompting those fears. Syunik was the scene of fierce fighting between Armenians and Azerbaijanis after the collapse of the Russian Empire in 1917. The territory was secured by Armenia shortly before the 1920 Soviet takeover of the country, but has since lost most of its remaining ethnic Azeri population.

For that reason, the prospect of “a significant number” of ethnic Azeris from Iran now moving into the area raises alarm bells for the extreme nationalist Armenian Aryan Union and Armenian Nationalists’ Union. In a joint statement on March 25, the two groups warned that the sheep deal “contains multiple threats, and if they are ignored, the state will face very serious challenges.”

Others, though, take stronger issue with what an influx of thousands of sheep would do to the region’s agricultural economy and to its environment.

While local officials say Syunik has “4,000-5,000 hectares of idle grazing areas” which can be leased and bring in much-needed cash, the administration head for the village of Kajaran, about 50 kilometers from the Iranian border, calls the notion of leasing pastures to Iran “absurd.”

“I don’t know about other people, but I will never give away my land . . .” fumed Rafik Ataian. “The Iranians will bring their sheep to graze here just because they are giving us tractors? Where can we use these tractors if we give our land to them and the villagers leave the country?”

Ultimately, the sheep could destroy the leased pasture areas in Syunik, just as they have done already on the Iranian side of the border, agreed Hakob Sanasarian, head of the Greens Union of Armenia.

“In Soviet times, taking this factor into account, a special decision was taken to prevent grazing sheep [in Syunik] since eco-systems were destroyed,” Sanasarian said. Unlike cattle, he added, “sheep devastate grazing land with their hooves.”

Deputy Prime Minster Armen Gevorgian, who heads the Ministry of Territorial Administration, assured skeptics at a December 2012 press conference that “everything will be done” to guarantee the “most efficient use of all the pastures in Armenia” and to protect locals’ income, but did not provide specifics.

Environmental activists have since written to Gorik Hakobian, director of Armenia’s National Security Service, an investigative agency, and to National Security Council Secretary Artur Baghdasarian to express worries about the proposed sheep deal with Iran, but have not received a response. Officials were not available for comment.

No repercussions from the US or European Union, busy enforcing an embargo against Iran for its nuclear research program, are expected as a result of the sheep deal. Given Armenia’s precarious geopolitical situation, both Washington and Brussels generally turn a blind eye to the country’s various projects with Iran, political analyst Sergei Minasian commented.

“If the collaboration is not dangerous, meaning that it has nothing to do with the arms industry or other related fields, then it will not cause problems,” said Minasian, deputy director of Yerevan’s Caucasus Institute.

But that doesn’t make the questions, particularly from the outspoken nationalist Armenian Revolutionary Federation- Dashnaktsutiun, any less.

“How appropriate is the so-called independent activity of the local authorities? How profitable will the agreement be for the state, if it is signed?” an irritated Dashnak legislator, Aghvan Vardanian, queried parliament on February 5. “Or maybe the adjacent farms will lose as a result of the contract? What kind of political, psychological and environmental consequences will it bring?”

For now, the answers are few.

Marianna Grigoryan is a freelance reporter based in Yerevan and editor of MediaLab.am.