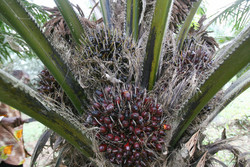 The West African palm-oil industry has been dominated by smallholder farmers since the oil was used to provision slave ships plying the Atlantic Ocean in the 16th century and later as soap in Britain and a lubricant for the machines of the industrial revolution. Photographer: Issouf Sanogo/AFP/Getty Images

Surveying miles of palm trees swaying softly in the tropical breeze in southwestern Ghana, Lim Peng Hor points proudly to a terraced slope of felled trunks that cuts through the lush landscape.

“Look at the way we have arranged the tree trunks: they keep the nutrients in the soil,” said Hor, general manager of Wilmar International Ltd. (WIL)’s industrial palm-oil estate, the second-biggest palm-oil plantation in the West African nation. “That’s how you’re supposed to do it.”

The 4,678-hectare (11,600-acre) Benso Oil Palm Plantation Ltd. (BOPP) is part of Singapore-based Wilmar’s push into Africa. Suitable land for palm-oil cultivation is running out in top producers Malaysia and Indonesia, which now account for about 85 percent of the global output. Demand for the world’s most used cooking oil is expected to double by 2020, driven by rising consumption in China and India, according to the World Bank.

Wilmar is among several companies searching for land in West and Central Africa, where the stocky, thick-stemmed oil palm originates. Land deals have been signed with governments ranging from Sierra Leone to Cameroon.

“These large-scale projects are very appealing,” Doug Hawkins, an agribusiness specialist at Hardman & Co., a London- based market research group, said in a telephone interview. “It gives real economies of scale, and with large plantations companies can operate their own oil mills and ultimately even sustain a refinery.”

About a million hectares of land is available for development in the region, according to Hawkins. Planters include Kuala Lumpur-based Sime Darby Bhd. (SIME), Singapore-based Olam International Ltd. (OLAM), Golden Veroleum Ltd., London-based Equatorial Palm Oil Plc (PAL) and even U.S. investment funds with no previous experience in the industry such as Herakles Farms.

Some of the initial optimism surrounding the expansion drive has dimmed, said Hans Perk, the Ghana country director of Solidaridad, a Dutch non-governmental organization that advises the nation’s palm-oil industry. Governments have been slow to resolve land-ownership disputes and local farmers are reluctant to adopt new methods, he said.

Land-ownership disputes have delayed operations for Sime Darby, which ventured into Africa in 2009 with a 220,000-hectare lease agreement in Liberia that prompted local farmers to complain they were being pushed off the land. So far, it has been able to plant only 5,021 hectares with oil palms, according to its website.

“Some companies come in and think they can always arrange things later with the government, but it doesn’t work that way,” Perk said in an interview in Accra, Ghana’s capital. “They quickly find out they are on their own.”

The West African palm-oil industry has been dominated by smallholder farmers since the oil was used to provision slave ships plying the Atlantic Ocean in the 16th century and later as soap in Britain and a lubricant for the machines of the industrial revolution.

In the post-colonial years, as production of petroleum and minerals such as gold dominated government revenue, interest in palm oil waned. African producers became importers of the oil in the 1960s as companies in Asia began planting industrial-scale highly structured palm-oil fields.

The exception is Ivory Coast, where large estates were established under the influence of former colonial ruler France. Today it’s the only West African exporter of palm oil, with local companies such as Palmci (PALC) SA and SIFCA Group shipping about 70,000 metric tons of the oil in 2011.

Palm oil Prices fell 2.5 percent in the first quarter. The contract for delivery in June advanced 1.9 percent yesterday to 2,382 ringgit ($772) a metric ton on the Malaysia Derivatives Exchange. 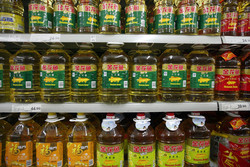 Wilmar International, which operates the biggest estate in Ivory Coast in a venture with SIFCA, aims to boost production and processing in the region, starting with Ghana and Nigeria.

At the Benso plantation, bought in 2011 from Unilever’s (UNA) Ghanaian unit, Wilmar is focusing on raising output and training small farmers on how improved harvesting techniques and fertilizers can boost yields.

Many farmers are content with producing an average of 4 tons per hectare, while yields can reach as much as 18 tons per hectare if the right amount of fertilizer is applied and oil palms are pruned regularly, said Benso Estate Manager Samuel Avaala.

Other obstacles are the climate, a lack of government support and the high costs of building roads, drains and bridges on the plantations. Unlike Indonesia, where rainfall is year- round, countries in West Africa experience three months of dry weather that limits palm-oil yields.

“Sometimes it can take up to three years to start development and planting,” Hawkins said. “Some projects will end up much smaller than they were originally conceived to be.”

A shortage of workers has hurt production too.

“There is gold in this area so people are more interested in small-scale mining,” said Joseph Amoakwao, a 51-year-old farmer who cultivates 4 hectares at the Benso plantation and 8 hectares outside. “Palm oil is hard work.”

Ghana’s Ministry of Agriculture says the country could triple the 300,000 hectares of land under palm-oil cultivation.

The government allocated 1.1 percent of its 2011 budget to agriculture, down from an average 8.7 percent from 2003 to 2009, according to One, an international advocacy group that researched how much African governments have invested in farming in the past decade. Along with cocoa, the country depends on oil and gold.

“I think there is a lack of interest in agriculture in general, and a lack of investment as a result,” Santosh Pillai, Wilmar’s West Africa director, said in an interview. “It’s a shame because palm oil has long-term benefits for the economy: you create more jobs than in mining or oil, and you create rural development.”

To contact the reporter on this story: Pauline Bax in Accra at [email protected]

To contact the editor responsible for this story: Antony Sguazzin at [email protected]