Chinese businessmen slow to exploit potential for farming in Africa 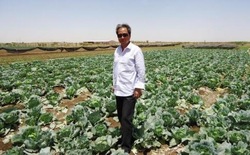 Jin Jianzheng in his Chinese cabbage field in Khartoum.

Jin Jianzheng, 57, has a job many Chinese might envy - farming 13 hectares of virgin land along the Blue Nile in Sudan.

His vegetable farm in Khartoum, Sudan's capital, provides a taste of home for Chinese who moved there to exploit the country's oil and mineral resources. In peaceful times, he made a profit of US$100,000 a year.

The Chinese government has long encouraged businesses to invest in agriculture abroad, and Xi Jinping's first foreign trip as president in the past week involved visits to three African countries.

Beijing's investment push has prompted many to accuse China of engaging in large-scale land grabs, especially in Africa, but Jin said social unrest and harsh living conditions meant Chinese businessmen had been slow to exploit the potential for farming in the underdeveloped continent.

"Sudan has a small population but a lot of arable land," he said. "Areas along the Nile are good for agricultural production, but people fear the social environment, so few Chinese have farmed well there so far."

When he started his farm in 2006, there were eight Chinese-invested vegetable farms around Khartoum, serving 20,000 Chinese people, mostly workers at oilfields and construction sites in the capital and neighbouring areas. Only a handful had survived, he said, with many Chinese projects abandoned because of fighting between Sudan and South Sudan that started in late 2011.

"Many [agricultural] projects emerged to serve larger projects, such as a PetroChina oil project … When there was war, all industries surrounding the project were affected," he said.

Jin said Chinese farmers had also invested in cotton planting and processing, but they struggled to make a good profit.

He said agriculture was not a popular industry for Chinese to invest in, at least for the time being, and no big Chinese company had invested in agriculture in Sudan.

The Chinese government has been encouraging agricultural companies to "go global" to seek investment opportunities because domestic resources are limited, putting increasing pressure on food supply for an increasingly affluent population.

Agriculture has always been an important part of China's foreign aid programme. Professor Deborah Brautigam, a specialist in Sino-African relations at Johns Hopkins University in the United States, estimated in a recent paper that at least 142 farms and agricultural demonstration centres had been built with Chinese aid in more than 40 African countries between 1960 and 2009.

However, Brautigam said China was not actively involved in large-scale farming in Africa.

She said China's embrace of Africa was "strategic, planned, long-term and still unfolding", and while large-scale land acquisitions might be a future part of that engagement, that had not been the case up till early last year at least.

Standard Chartered Bank echoed Brautigam's research in a report on Sino-African agricultural trade last year, estimating that Chinese firms had leased about 100,000 hectares of land in Africa, much less than Indian and Middle Eastern companies.

The report said high transport costs due to poor infrastructure meant that most Chinese agricultural investors in Africa were not looking to export to China.

Ministry of Commerce data shows that China imported about US$2.8 billion of agricultural products from Africa last year, accounting for just 2.5 per cent of its total agricultural imports in 2012.

This article first appeared in the South China Morning Post print edition on Mar 31, 2013 as A taste of home for Chinese working in Sudan