Under the agreement, Al-Dahra will use a third of its investment to purchase eight bankrupt agricultural firms, mainly in Serbia’s fertile north.
Reuters | Thursday 28 March 2013

BELGRADE: Abu Dhabi-based firm Al-Dahra agreed to invest $ 400 million to buy eight Serbian farm companies and develop them to grow and process food and fodder for export, in the biggest investment in Serbian agriculture for decades.

The agreement between Belgrade and Al-Dahra came a day after the UAE Development Fund approved a separate $400 million loan for Serbian agriculture, Serbia’s Finance Ministry said.

Serbia is looking to potential investors such as Russia, China and the UAE, while its traditional trading partners in the euro zone struggle with a debt crisis.

Meanwhile, countries in the Gulf, one of the world’s biggest food importing regions, have stepped up efforts to buy and lease farmland in developing nations to secure food supplies since 2007-2008, when food prices rose to record levels.

Under the agreement, Al-Dahra will use a third of its investment to purchase eight bankrupt agricultural firms, mainly in Serbia’s fertile north.

The remainder will be invested in irrigation and the development of at least five fodder plants, Dinkic said.

Agriculture accounted for 20 percent of Serbia’s exports in 2012, but farms lack modern irrigation and suffer from floods and droughts. The government plans to increase agriculture subsidies this year by 25 percent from 2012 to reach 3.7 percent of the budget.

Serbia is targeting economic growth of 2 percent this year after a contraction of about 1.9 percent in 2012. 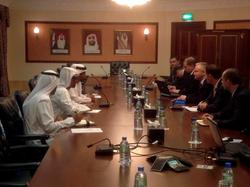 The deal was signed in the United Arab Emirates on Thursday
Tanjug | March 28, 2013

The deal was signed in the United Arab Emirates on Thursday and money will be invested in Serbian agriculture.

One-third of the investment will be used to purchase assets of eight failed agricultural combines, while the rest will go into installing irrigation systems, purchasing modern equipment and current assets needed for construction and operation of at least five factories for the production of cattle feed, the Finance and Economy Ministry said in a release.

“With the arrival of Al Dahra, we expect agricultural productivity to increase and Serbia to become a major food exporter. We also want to ensure food security of our population,” he said.

Dinkić was received by Sheikh Hamed bin Zayed Al Nahyan, head of the Abu Dhabi Investment Authority, one of the biggest investment funds in the world that has about USD 1.3 trillion in assets.

Dinkić and Sheikh Al Nahyan discussed possible investment by the fund in several major industrial projects in Serbia, for which the Emirates showed serious interest.

On Thursday, Dinkić also met with representatives of the Mubadala Aerospace and the Advanced Technology Investment Company (ATIC), a wholly-owned subsidiary of Mubadala Development Company, for talks on opportunities for partnership with Serbia's company Jat Tehnika.