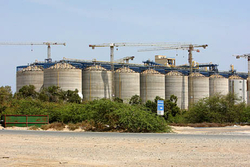 The UAE is working with companies such as Al Dahra and Agthia on creating strategic food reserves. Above, grain silos in Fujairah. Pawan Singh / The National
The National | 28.03.2013

The Emirates and other Arabian Gulf countries are changing their agricultural investment strategies to ensure food security for their populations.

The 2008 financial crisis was a wake-up call as food prices keep increasing, and Gulf governments "are acutely aware of major population growth and no water", said Nicholas Lodge, the managing partner at Clarity, a consultancy that advises on investments in agricultural industries.

"They need to secure supplies, but realistically this will not involve much domestic production, certainly not of water-intensive, large-scale crops - the staples, such as rice, grain," he said.

"This should be done in areas of the world with the right fundamentals; in some instances domestic production is maintained when it really is not the best use of the limited resources available."

The UAE is working with large private groups, such as Al Dahra and the silo operator Agthia, to make sure strategic food reserves, especially the staples such as wheat and rice, are available inside and outside the country.

The Fujairah Strategic Grain Terminal, which was expected to open last year, would comprise 20 concrete silos. Of these, 14 would store wheat and six are marked for rice storage. When complete, it will be able to store 275,000 tonnes of grain and would also act as a grain transfer hub for other Gulf countries. It aims to expand to 700,000 tonnes capacity.

Abu Dhabi, too, is adding 10 wheat grain silos to its existing storage facility. Managed and operated by Agthia, the new silos will be able to store 50,000 tonnes of grain in Al Wathba. The Port Zayed facility, which dates back to 1978, can store 150,000 tonnes.

"The UAE is looking not just at land [acquisitions] but developing the whole supply chain," Mr Lodge said.

DP World, for instance, is planning ports projects in Africa and South America as well as Europe and South Asia that would indirectly help to secure food supplies.

"[Gulf] governments must have a common policy regarding food security, and they must share resources and projects," said Brian Barriskill, the supply chain director at Al Dahra Agriculture. He was speaking at the Agra Middle East convention in Dubai. The Abu Dhabi-based Al Dahra manages strategic supplies in staple food and has offices in Pakistan, Namibia, Egypt, Sudan, Spain and the United States.

Strategic reserves can mean actual stocks of food can be held at a regional level for regional distribution in times of need, as well as land and production assets.

"With a collaborative approach, food production will reach international standards in terms of yields, and sustainable agriculture of basic products will encourage food production companies to set up plants in the region, which will reduce imported food," Mr Barriskill said.

Al Dahra's overseas investment is about Dh3.2 billion (US$871.1 million) and in the UAE it is about Dh2bn to support the Emirates' food security programme. The country currently imports 94 per cent of its food.

And the key crops are alfalfa, wheat, barley, corn and rice.

Whereas the past 15 years were marked by Gulf investments in large tracts of land in Africa, the trend is now pointing towards Australia and New Zealand.

Emirates Investments Group's chief executive Syed Tariq Husain, however, said investments had been continuing in Australia and New Zealand as well as Africa for the past two decades. But trade links with the Oceania countries had been increasing.

"There is more political stability [compared to Africa] and it is more investor-friendly now," he said, referring to Australasia. The Sharjah-based company focuses on private equity and venture capital investments in food and agriculture sectors.

The nature of investments in the two regions are different. Whereas in Africa investments are more in green fields, though not through ownership because of political implications, in Australasia these are bigger and at a corporate level while not buying out the majority stake, Mr Husain said.

"There is more investment there given the right mix of transparency around land and stable countries that are already in the business of exports," Mr Lodge said. New Zealand, for instance, exports 90 per cent of its sheep meat and 80 per cent of its beef products, according to the country's meat industry.

The UAE is looking at dairy investment in New Zealand, beef and wheat production in Australia, and Brazil for soybeans, Mr Lodge said.

Farming in these countries is done in a sustainable method, and can do better with more investment, he said. The Abu Dhabi-based Clarity advises private family businesses as well as sovereign wealth funds.

The previous investments in Africa were mostly marked by a lack of concern for the development of supply chain and infrastructure. Many of the projects did not get off the ground as a result, Mr Lodge said. "Land titles were not clear, transport costs across Africa are multiples of what is around the world, and [the investments] failed to do much for the host country."

The investment size in Africa tends to range from 3,000 to 20,000 hectares. For New Zealand and Australia, the price ranged from $25m to $100m to expand or buy a stake in an existing business, he said.

Land prices vary wildly according to the region.

In Africa, land can cost from $100 to $300 per hectare, although typically these would require investment to make it "shovel-ready".

But there is also a need to use advanced technologies, such as hydroponics, that ensure minimal use of water to grow food, such as fresh fruits and vegetables, in the Gulf countries. Between 2011 and 2016, they are expected to spend an additional $100bn in desalination capacity.

Currently, the region spends $36bn annually in food imports, and the figure for the UAE was about $10bn last year, Mr Lodge said. The figures are expected to double in 20 years.

The figures include fresh produce, such as cherry tomatoes, which are in demand from the hospitality and tourism industries. For high end fresh fruits alone, the UAE spends from $500m to $1.3bn annually, he said.