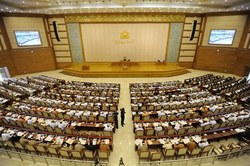 Burma’s Union Parliament on Monday approved new regulations on foreign investment that will allow foreigners up to 80 percent ownership of ventures in restricted sectors including natural resources.

The regulations supplement a new law passed in November last year that aims to draw foreign investment to the resource-rich country, whose economy has stagnated under decades of mismanagement by the former military regime.

The law banned 100 percent foreign ownership in 11 restricted sectors including natural resources and the environment; agriculture, livestock, and fisheries; manufacturing and services operations that Burmese “are capable of handling”; and industries that could “affect public health” such as those dealing with toxic waste.

But under the rules approved on Monday, foreign investors will be allowed to have up to an 80 percent share in ventures in those sectors, while Burmese nationals must hold the other 20 percent.

In Monday’s vote, the proposal from the Upper House of parliament for the 20-80 ratio beat out one from the Lower House that would have allowed up to 51 percent foreign investment.

In a vote including both houses of parliament, lawmakers voted to reject a draft of the regulations that backed the 49-51 ratio favored by the Lower House.

“We got 235 votes for, 306 against, and 10 abstaining on the draft law committee’s proposal,” Speaker of the Upper House Khin Aung Myint said.

“Because there are more votes rejecting this proposal, the act will be approved in favor of the Upper House’s proposal,” he said.

The rules are meant to clarify amendments made under the November FDI law, which replaces legislation that had been in place since 1988 under military junta rule.

Foreign firms are chomping at the bit to gain access to rapidly reforming Burma’s large population and huge amount of natural resources—particularly in the extractive sector—but have complained about the country’s lack of a clear legal framework for doing business there.

Lawmakers and rights groups have expressed concern about how to ensure the Burmese people benefit from economic development as the country opens up to foreign investment following decades of military rule, with some warning about a potential “land-grabbing epidemic.”

Correction: An earlier version of this story inaccurately stated that foreigners were allowed up to 20 percent stake while Burmese investors must hold the other 80 percent.