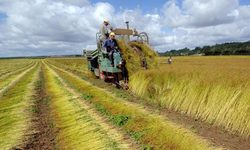 The potential for investment in Eastern European agricultural land is gaining more and more attention. Information is being dug up by individual commercial investment organizations to make investment moves. Rapid initial investment during the last decade caused some governments to put a hold on foreign ownership activity, and other countries’ governments to debate putting limitations in place.

One country where investment movement could resume in 2014 is Romania, but little information is being shared even though Romania is a member of the European Union. Extremely small farm fields with peasant ownership is the main configuration of land ownership and an obstacle that has to be overcome to put together continuous large-hectare farms.

A recent short blog posting by Hubert Kamola on the Pulawy Company site provides a brief explanation of the potential for farmland investment. Pulawy is a chemical, mainly nitrogen fertilizers company. The blog posting about Romania is as follows:

Farmland takes up 14.7 million hectares in Romania, including 9.5 million hectares of arable land. Owing to temperate climate, cultivation of various types of plants is possible. After the restitution of property rights, nearly 4.2 million Romanian citizens became owners of farmland. It is estimated that 3.8 million farms function on 13.7 million hectares, taking up an average of 2.34 hectares.

Unfortunately, the progress of automation and popularization is slow. Consequently, 30 percent of the workforce is employed in the agricultural sector. Also, the potential of the land, two-thirds of which is very fertile is not used fully.

Farmland in Romania has one more advantage, namely its low price. The price of a hectare of land is about 2500 euro. However, those eager to purchase Romanian land will have to wait until 2014. This is when the ban on such transactions by individual and institutional buyers from other EU countries expires. Until then, such purchases are only possible upon approval of specified state institutions.

One method of purchasing land is registering a company in Romania. Thanks to more liberal laws, such enterprises, even if all owners are foreign, may buy land. The situation is similar in the case of individuals who are foreigners, yet with permanent residence in Romania. Another solution is leasing land, which only requires registration with the local administrative office and the appropriate land register. The caveat is that such lease may last no longer than 49 years.

Summing up, Romania may soon become a Promised Land for individuals and institutions seeking to consolidate farmland. Admittedly, 2014 is not a distant date.

We ought to keep our eyes focused on this country partly because of the favorable conditions and climate in Romania, and partly due to low prices of land. The potential of Romania as a market for agricultural technologies is untapped. The future owners of local farmland are very likely to invest in the development of the newly acquired property.