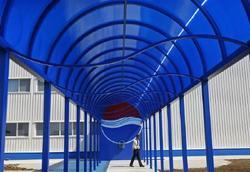 The Russian farm operator - which controls a landbank of more than 3,000 square kilometres - underlines importance of 3-yr supply deal with PepsiCo, to grow beet for sugar and potatoes for making crisps.

Shares in Black Earth Farming jumped to a 15-month high after the group, at its seventh attempt, unveiled its first full-year profit, and progress in measures to ensure it keeps up a better performance.

The Russian farm operator - which controls a landbank of more than 3,000 square kilometres, an area twice the size of Greater London - revealed earnings of $7.2m, or 231m roubles, for 2012.

Black Earth shares, which are listed in Stockholm soared to SEK12.95 in opening deals, as jhump of nearly 10% and the highest since November 2011, before easing back to SEK 12.50 in midday deals, up 5.9% on the day.

The move into the black was "a milestone and a significant improvement", Richard Warburton, the Black Earth chief executive, said, noting the contribution to the "turnaround" from "improved crop yields, control of logistics and effective marketing".

The group has returned to export markets, boosted soil fertility through measures such as lime applications, and upgraded its elevator network, enabling better crop blending and storage and avoiding an estimated in $15m in discounts for missing quality specifications.

"The focus on improving logistics, drying and storage meant that, unlike 2011, we got all dryers working and elevators working much more efficiently," Mr Warburton said.

The group's grains and oilseeds harvest rose 6.6% to 458,000 tonnes thanks to strong yields for spring crops, in wheat was a poor year for Russia's overall harvest, with an increased focus on sugar beet taking total Black Earth volumes up 23% to more than 630,000 tonnes.

However, Mr Warburton also acknowledged the boost from higher crop prices, and of high carry-in stocks, in a more than doubling to $146.8m in annual revenues.

The figures had also been flattered by the uplift to values of stored crop from near-record market prices.

"We have been helped by high agricultural commodity prices," he said.

"We are far from satisfied with the improvements to date [in yields] and intend to step up our efforts by significantly increasing training at all levels to improve technical decision making and operator performance.

"We cannot bank on the current high prices for future years and are very realistic about what we have to achieve in order to deliver profits in lower price years."

Measures being undertaken to support profits in future include further land improvements, and taking out insurance to meet a priority of reducing revenue volatility.

"For 2013 crop we have for the first time invested in crop insurance in order to reduce the potential negative financial effects of a major weather event affecting crop yields in our regions," Mr Warburton said.

He also underlined the importance for risk management of a supply deal with PepsiCo, for which it has signed a three-year deal for growing beet for sugar and potatoes for making crisps.

Sugar beet and potatoes, and corn, will form an increase part of the group's crop mix, he said, while revealing that the group had maintained its winter wheat area at 74,000 hectares, out of total sowings expected at 230,000 hectares.