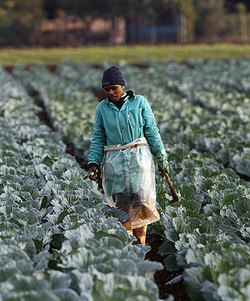 The proposal to limit foreign land ownership in South Africa to a leasehold of a minimum of 30 years, part of a new land tenure system contained in the Green Paper on Land Reform, is not a sign of antagonism to foreign investment, says Rural Development and Land Reform Minister Gugile Nkwinti.

At the same time, says Nkwinti, foreigners cannot be excluded from playing a role in land transformation.

"If we are saying to South Africans we will limit the extent of your [tenure] holding in order to have land to redistribute, we can't leave [foreigners] out of that process, just because they are here and are investing," Nkwinti said last week.

If the proposal is approved, foreigners will only be permitted to lease land on a long-lease basis for a minimum of 30 years, Nkwinti said, although this could grow to 50- or 99-year leaseholds.

Nkwinti said he would meet with foreign ambassadors next month to explain the significance of the proposal. His department had already met with a European Union delegation in 2011 and with a delegation from Germany last year.

He said the Land Management Commission, which is also proposed in the Green Paper, would oversee land owned by foreigners, but Nkwinti said the focus for now would be on restricting agricultural land ownership by foreigners.

Permanent residents would be treated as free-hold holders with limited extent, he said.

Nkwinti said a team of lawyers was working on the re-opening of land claims and addition of claims for land confiscated before 1913. The re-opening of lodgment of claims would take place once amendments to the Restitution of Land Rights Act had been signed into law by President Jacob Zuma.

In his State of the Nation Address last week, Zuma announced the re-opening of the lodgement of land claims for those who could not claim during the first window of opportunity.

This announcement has two aspects to it. Firstly, the reopening of the lodgement of land claims, and secondly, the creation of exceptions to the 1913 Natives Land Acts for heritage sites, historic landmarks and opportunities for the descendants of the Khoi and San to claim.

Nkwinti said he had been working with the legal team for the past 18 months and had held a workshop with them last weekend, giving them two weeks to codify the new changes to the Act.

This had made it difficult for the state to achieve its target of 30% black ownership of South African land by 2014, Nkwinti said, adding that many land-claim recipients had opted to be paid out because of poverty or because they wanted to move to cities.

The department was compiling a manual, to be translated into all 11 languages, on how to go about making a land reclaim.

Nkwinti is due to meet descendants of Khoi and San communities to discuss land claims next month.