How Ethiopians are being pushed off their land 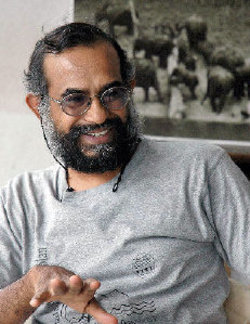 Ashish Kothari of Kalpavriksh: "What is happening in Ethiopia (and other African countries) is an outcome of India’s own aggressive push towards globalised economic growth."

“It is not a land-grab, it is a life-grab. It is daylight robbery. But if we protest, if we speak the truth, we could end up in jail or worse.” Obang Metho was referring to the leasing of land to foreign companies in Ethiopia, spreading over nearly four million hectares. Nyikaw Ochalla joined in: “This is happening in the lands I grew up in, and it is my relatives and childhood friends who are being jailed, beaten up, and driven out; my childhood memories are being violated.”

Metho of the Solidarity Movement for a New Ethiopia, and Ochalla of the Anuak Survival Organisation were speaking at the “Indian-Ethiopian Seminar on Land Investments” organised on February 5-6, 2013 in New Delhi. The seminar was put together by Indian civil society groups Indian Social Action Forum (Insaf), Popular Education and Action Centre (Peace), and Kalpavriksh, the research institution Council for Social Development, and the U.S.-based research group Oakland Institute.

The stories narrated by Obang and Ochalla were harrowing. The lands being leased by the Ethiopian government to companies from India, China, Malaysia, and other countries, were claimed by it to be “empty.” In actual fact these are areas occupied or used by pastoral and small farming communities, as also grasslands and forests with significant wildlife. Decisions are being taken in the country’s capital to give up these lands ostensibly to help the country produce food and generate revenues; the underlying message is that either there is no one there to do the job, or that local communities are simply not up to the mark.

Indian companies are among the biggest players in the land deals, with investments of over $5 billion, and leases over 6,00,000 hectares. Karuturi Global, a Bangalore-based agroproduce company has alone received 3,00,000 hectares. Claims by these companies and by the Ethiopian government that the deals are legal and entail no human rights violations, have been shown as false in a series of on-ground investigations. The Oakland Institute has meticulously documented the nexus of corporations, politicians, investors, and officials that has made the land-grab possible. It notes that there is no public consultation with local communities (much less their consent), many of whom find out that their pastures or fields have been sold off only when bulldozers arrive. Any form of resistance or even questioning is met with imprisonment, beating up, and even killing. Both private security companies and the Ethiopian government’s own forces are used to protect the investors. And there is a total lack of environmental and social impact assessments in these deals.

It is also stated sometimes that what Indian companies are doing abroad, is not the responsibility of the government. But this ignores the various ways in which the Indian government facilitates and supports such deals, not only through diplomatic channels but also financially (even if indirectly). For instance the Indian Export-Import Bank has pledged $640 million of credit over five years for Ethiopia’s sugar industry, and the fact that Indian companies are getting the biggest deals for sugarcane plantations cannot be unconnected.

Obang and Ochalla were careful to clarify that they were not against India’s people, who they realised could not be supporting such land-grab; however, for the affected communities, “it is Indians who are doing this to us.” It is therefore important for groups here to question the intentions and actions of Indian companies and the Indian government agencies supporting them. Does their behaviour in Ethiopia meet the laws or guidelines under which Indian companies act within their own country? Does it meet international standards of human rights and environmental sustainability that India is a signatory to?

Over the next couple of years, the Ethiopian government plans to forcibly move 1.5 million people off their homelands and concentrate them into a few settlements in a process called “villagisation.” It claims that this will enable it to provide efficient and good quality services like drinking water, sanitation, schools, and clinics, which is not possible in the case of today’s scattered, small settlements. But Obang and Ochalla point out that all the relocation is taking place from lands targeted by investor companies, and that even where communities are saying they would much rather stay where they are with whatever amenities they have, they are being forcibly moved out.

The claim that such investments are a “win-win” deal for the Ethiopian people and Indian companies is also questionable. Much of the production (sugarcane, cotton, jatropha, etc) is meant for export, and local foodgrains which are the staple diet are not being grown. Very little local employment is created; there is no requirement by the Ethiopian government that companies have to hire locally. Nor is there any contractual clause by which the money generated is to remain within the Ethiopian economy. A handful of businessmen and politicians are the prime beneficiaries.

Obang and Ochalla were at pains to state that part of the blame for this sell-out is located within the country’s own history, in which sometimes adverse relations between different tribes have become entrenched in the political system. The country’s ruling elite are from a tiny minority belonging to one ethnic group, who can ignore the sufferings of other groups affected by land-grab. In this sense, it is the Ethiopian people themselves who have to resolve the problem. But there is also an important role for India’s people, especially in highlighting the role of their own companies and government, and facilitating greater awareness of what is taking place in the name of Ethiopia’s development.

What is happening in Ethiopia (and other African countries) is an outcome of India’s own aggressive push towards globalised economic growth. The growth fetish has led to situations of both internal and external colonisation, in which farms, waterbodies, forests, grasslands and other natural resources are all up for grabs.

It was an ironical coincidence that on the very days the consultations on Indian land-grab in Ethiopia were taking place in New Delhi, police action was under way to forcibly evict villagers in Odisha to make way for the Korean multinational Posco. Representatives of movements from Jharkhand, Karnataka and elsewhere told Obang and Ochalla that they were facing similar repression while resisting forcible takeover by the government or by corporations. The currently dominant model of “development” is pushing such violence across the globe, wherever dominant nation-states and giant corporations are eyeing land and resources.

In such a situation, people in India who care for human rights, ecological sustainability, and basic justice, have to raise fundamental critiques of “development” and centralised governance, and work towards radical alternatives that secure the rights of all people to food, water, shelter, energy, learning, health and livelihoods. Such alternatives are already demonstrated to be feasible at thousands of sites across the world, but it requires a mindset change for both the Ethiopian and Indian governments to facilitate the empowerment of local communities to adopt them, rather than paving the way for corporate takeover. Neither the founders of India nor of Ethiopia would have dreamt of a future in which development takes place at gunpoint.

(Ashish Kothari is with Kalpavriksh, Pune.)