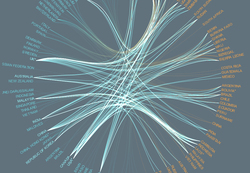 Image from the Land Matrix

The well known journal Proceedings of the National Academy of Sciences (PNAS) has published an article about global land grabs and their implications for water usage.

The authors point out important issues around land investments like the potential disenfranchisement of customary land rights holders and excessive (green and blue) water use for export crops that could compromise domestic food security.

The article does not contain primary research, instead  it marches to the usual naive quantitative drumbeat of mainstream academia: first you need to have a “database,” then you build a “model” and then you come up with some life altering findings that common sense would have been unable to achieve. In this case they have found out that water scarce countries tend to look for water resources while investing in land.

The farmlandgrab blog of the NGO GRAIN that they are using is a great source of information if you take it for what it is: a comprehensive collection of media reports about land deals. The problem is that announced agro-projects are not necessarily agro-projects actually happening. There is a huge implementation gap.

The much touted Land Matrix database, which they use to cross check the GRAIN dataset, claimed to verify such media reports. Yet at its launch it included a lot of double entries and projects over millions of hectares that never materialized like those of South Korean Daewoo in Madagascar and Chinese ZTE in Republic of Congo.

Chinese investments in particular were misrepresented. In Sudan on the other hand the Land Matrix did not contain a single project of those that have seen some degree of realization in North Sudan, but it had  a flurry of land deals in South Sudan that never made it beyond the announcement stage (e.g. the one by self-stylized Cowboy/ Mafia head investor Phil Heilberg).

Unfortunately the Land Matrix did not publish the reliability codes that it attributed to deals after cross checking. A lot of the supposed “triangulation” seems to have been between various media reports: There is a press release, journalists jump on it, an NGO reports about it as well, and all over sudden one has “triangulation.” Thus, paper deals and mere declarations of intent become projects for real. The clueless academics use it for their studies, which are then taken up again by equally clueless journalists and the news cycle closes.

The Land Matrix team has reacted to criticism. It has taken some of the paper projects off the database and is “currently developing a completely new data management system behind the interface.” Thus the database might improve over time.

Yet at its inception and when the PNAS article went to peer-review in May 2012 the Land Matrix gave a highly misleading picture about the extent of land grabs. The PNAS article is evidently unaware of criticism of the LM database. “Failed and unverified deals are not included in the Land Matrix database,” it claims. Then it continues with a nice euphemism, saying that the data might have  a “few biases resulting from the lack of transparency”……

Unsurprisingly the PNAS article dishes out outlandish figures, claiming that over 17 percent of the land area of the Philippines has been grabbed by foreign investors. During a visit of mine on the Philippines in 2010 none of the announced ago-investments had gotten off the ground. Forthcoming field research by Gerben Nooteboom and Rosanne Rutten of the University of Amsterdam deals with land use change and the implementation gap of foreign agro-investments in the Philippines and Indonesia. The numbers for the UAE and Israel in the PNAS article are also out of touch with reality.

This is not to say that land grabs are not happening – especially on a national level between nationals, not necessarily foreigners. They are also problematic, but the continuous hyping of large and unverified figures does a disservice to the important issues that are at stake. A more sober debate is needed that takes stock of different quantities, but also of the need for agricultural investments and how they might be undertaken in a way that could lead to different qualities. The Manichean picture of neo-colonialism on the one hand and romanticized subsistence farming on the other is just too simple.

On a more general plane I grow increasingly bored with the mathematical fetish in social sciences. The economists pretend to practice hard science like physics, even though they are closer to theology with their axiomatic and ahistoric belief in homo economicus.

Yet everybody wants to be like them now: Whether it is political scientists, sociologists or psychologists. They start out with a boring question and a “database”, then follows a lengthy mathematical “proof” in the middle and at the end they come up with silly answers and unsurprising correlations, right at a point where the real questions should begin. It is like those medieval scholastics debating how many angels can sit on the pin of a needle.

It is high time that the social sciences regain their critical faculties and say that the king of economics is naked. After all economists did not have the slightest clue ahead of the global financial crisis as far as their orthodoxy is concerned.  And no, it was not just the databases or the models that were wrong, but the basic assumptions of the profession.