Ethiopians 'driven out in land grabs' 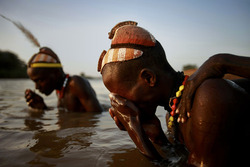 The Oakland Institute says that in the Lower Omo Valley, where the government has earmarked 1.1 million acres for plantations to grow palm oils, cereals and other crops, human rights abuses are rampant among the 200,000 pastoralist farmers with tribal leaders imprisoned and dozens of people killed. (Photo: Brent Stirton/Getty Images)

ADDIS ABABA, Ethiopia, Feb. 8 (UPI) -- Thousands of Ethiopians are being driven off ancestral lands that the government's selling to foreign investors buying vast swathes of farmland, a U.S. watchdog reports.

Amid a new rash of land grabs in Africa by foreign governments or business groups seeking to produce food for export, the Oakland Institute of California says that Ethiopia, one of the world's poorest states, has leased 1.5 million acres of prime farmland to companies from India, Malaysia and elsewhere.

The institute, an independent policy think tank that specializes in food and land issues, says the crisis is likely to worsen as the foreign companies move in and start operations.

It said the Addis Ababa government plans to lease as much as 15 percent of the land in some regions of the land-locked East African country, which has long been beset by drought, famine and war.

The institute says that in the Lower Omo Valley, where the government has earmarked 1.1 million acres for plantations to grow palm oils, cereals and other crops, human rights abuses are rampant among the 200,000 pastoralist farmers with tribal leaders imprisoned and dozens of people killed.

Mass relocations are being carried out because the government's building the $2 billion Gibe hydroelectric dam on the Omo River to irrigate the plantations, part of major irrigation plan to boost agriculture.

Ethiopia also plans to invest $12 billion in hydropower projects on the Blue Nile, which rises in the Ethiopian highlands, and its tributaries to boost electricity generation to 40,000 megawatts by 2035.

Some 2,000 troops reportedly have been deployed in the Omo region to clear out the villagers.

"Investors seem to be cherry-picking countries with weak rules and regulations because they're easy targets.

"This can spell disaster for communities if these deals result in their homes and livelihoods being grabbed," she declared.

Oakland observed that the Ethiopian government has extended generous tax breaks and other incentives to the investing companies, as well as some of the cheapest land on the planet.

Oakland says the Ethiopian "land rush" is part of a global phenomenon in which sales in Africa, Latin America and Asia have been led by farm conglomerates back by Western hedge and pension funds, speculators and even universities.

Many Middle Eastern governments, burdened by water problems and little arable land, have supported the sales with loans and guarantees to ensure future food supplies for burgeoning populations.

The head of the United Nations' Food and Agriculture Organization warned in 2012 that the "land grabs" of vast tracts of African farmland by foreign governments and investors is like the "Wild West" and threatens the continent's food security.

Graziano da Silva said the FAO is powerless to stop the stampede that began several years ago, and declared that a "sheriff" is needed to restore order before the phenomenon gets out of control.

At a time when food shortages are becoming more common as the world's population keeps swelling, da Silva told Britain's Guardian newspaper: "I don't see that it's possible to stop it.

"They're private investors. We don't have the tools and the instruments to stop big companies buying land. Land acquisitions are a reality.

"We can't wish them away but we have to find a proper way of limiting them. It appears to be like the 'Wild West,' and we need a sheriff and law in place."

The land grabs were triggered by the 2007-08 world food price crisis, with countries like oil-rich Saudi Arabia and South Korea buying or leasing vast tracts of land in Africa, Asia and Latin America to grow food for their own populations.

Oxfam says much of the land taken over is being used by speculators, including U.S. banks, hedge funds and other high-profile institutions, to grow biofuels to sell for hefty profits rather than produce food.