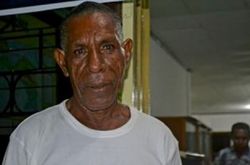 At the launch of the Merauke Integrated Food and Energy Estate project in 2010, President Susilo Bambang Yudhoyono announced that the agribusinesses involved would “feed Indonesia, then feed the world.”

But the Malind Anim people of Merauke, Papua, say they are worried that the impacts of the project known as Mifee will prevent them from being able to feed their families for generations to come.

“Our rivers have been poisoned, our forests destroyed, our sago trees cut down and the animals we used to hunt killed. We’ve become poorer and our childrens’ health suffer because of pollution from the companies,” says Cornelis Tuwong, a representative for the secretariat for justice and peace from the greater diocese of Merauke.

In December, Tuwong led a group of eight Malind Anim clan leaders to the provincial capital Jayapura to seek help from Foker LSM Papua, a coalition of Papuan nongovernmental organizations, and Sawit Watch, the largest Indonesian NGO monitoring the development of palm oil plantations in the country.

The leaders hoped to gain support for their ongoing struggles over land and other natural resources with palm oil companies and agribusiness corporations now operating in Merauke under the Mifee project.

Mifee is part of the central government’s Masterplan for the Acceleration and Expansion of Indonesia’s Economic Development (MP3EI) for 2011 to 2025. The project is valued at approximately $5 billion and aims to dramatically increase agricultural output, putting Indonesia on track toward self-sufficiency in basic foodstuffs.

To fulfill the ambitious Mifee aims, the Indonesian government declared that 1.2 million hectares of land would have to be cleared.

According to the 2011 Indonesia Agribusiness Report published by Business Monitor International, “the government claims that the new land will come from unforested scrubland, though considering the size of the proposed project it seems likely that natural forest would also have to be felled.”

Indeed, that is precisely what has happened.

Nanang Sanjaya’s documentary “Mama Malind su Hilang” (“Our Land Has Gone”), released in Bogor on Oct. 19 last year, depicts the rampant destruction not only of land, wildlife and forests but also cultural practices of the Malind Anim people.

Promises of jobs, schools and improved infrastructure have not materialized. Local nurses explain that the poisoning of fish, the destruction of sago plants and extinction of animals such as deer in the area have resulted in increased levels of malnutrition. Pollution from fertilizers and wood-chipping has caused an unprecedented number of bronchitis and asthma cases.

Interviews with indigenous people in the village of Zanegi, in the Animha district of Merauke, echo the pleas of the clan leaders led by Tuwong to Jayapura.

They say outsiders have been brought in to Merauke to work, while local people have been subjected to arbitrary detainment and violence at the hands of the police.

On Oct. 16, 2010, in a blatant attempt to intimidate those who oppose Mifee, the Merauke police reportedly arrested activists Billy Metemko, Thomas Tonggap and F.X. Sirfefa, three founding members of an organization known as Sorpatom, or the Papuan People’s Solidarity in Rejecting Mifee. They were held without warrant for five hours.

The Malind Anim people and other indigenous groups affected by Mifee, including the Awyu, Jair and Wambon people, are mainly sago farmers, fishermen and hunter-gatherers.

Damage to the natural environment caused by the industrial activities of agribusinesses and palm oil plantations has severely affected the health and food security of these indigenous groups.

“Metco is the biggest palm oil company in the area where I live. They’ve cheated us, cut down our trees and converted all the land into palm oil plantations,” says Christianus Ungkujay, a clan leader from Kuel village, Elikobel district.

“The fertilizers they use have polluted the river. Now the fish are poisoned and the women have to walk at least five kilometers to get water to use at home. Our peanut, banana and sago plantations have either been cut down or died. The compensation they promised us hasn’t been delivered.”

Forty-six companies are now operating under the Mifee project in Merauke. Ten of these are palm oil companies, with Korindo, Tunas Sawerma and Agiprima Cipta Persada being three of the largest.

“We don’t want to work for palm oil companies, we want our forest back,” Ungkujay continues. “We work with iman [spiritual faith], not with modern equipment or capital. They haven’t just destroyed our livelihoods, they’ve destroyed our culture. This is not development, this is deception. Our land belongs to our ancestors. How can we pass it on to our grandchildren now?”

Tuwong explains that some villagers in Merauke have struck deals with big companies, only to feel cheated once the transaction is completed.

“On June 1, 2012, Agiprima Cipta Persada paid the people of Marimbian village Rp 2 billion [$207,000] for land for palm oil plantations,” he says. “The people thought it was a lot of money, so they were happy. But the money was given to the leaders of the nine Marimbian clans. Then it had to be divided between all their relatives. In the end each person got between Rp 20,000 and Rp 80,000. Everyone regretted what they’d done. People were furious, but there was nothing they could do. Their land had already been taken.”

Staunch resistance from local people has gone beyond protests and meetings with NGOs in Papua. The Malind Anim people have submitted their complaints to the United Nations High Commissioner for Human Rights detailing the destruction of indigenous land, military coercion and the lack of an environmental impact assessment before the Mifee project began in Merauke.

The complaints have been forwarded to the Indonesian ambassador to the UN, who has been asked to explain the effects of transmigration on local people, the reasons why an EIA was not carried out and what measures had been taken to ensure “the free, prior and informed consent of Malind [Anim] and other indigenous peoples in Papua before carrying out the Mifee project.”

The Indonesian government has not offered a response and has refused to engage in any dialogue with the UN regarding Mifee.

“The land the companies have taken is our ancestors’ land. It belongs to our grandchildren,” says Tuwong. “For these reasons, we reject Mifee.”