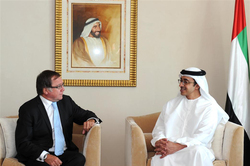 Dubai: New Zealand will soon be proposing an evolving plan of food security to the Gulf Cooperation Countries (GCC) and particularly the UAE, Murray McCully, New Zealand Minister of Foreign Affairs said in a special interview with Gulf News, “New Zealand’s background and long history of agriculture production and technology will be invested to serve the interest of the food security programme not only in the UAE but the GCC countries as well.”

New Zealand has the world’s leading farm practices, most advanced food technologies, and strongest food brands, and can assist other countries in producing food, he said. During his two-day visit to the UAE McCully met with Shaikh Abdullah Bin Zayed Al Nahyan, UAE Minister of Foreign Affairs and discussed key issues to enhance bilateral relations between the two countries. “There are substantial resources in the UAE and with our expertise we can achieve an evolution rather than solution to the food issues across the gulf region,” the minister added.

“According to the forthcoming strategy and the regular talks between the two countries, New Zealand will assist the UAE in the food security issue in three main ways — by increasing exports to the UAE, developing agriculture and irrigation system as well as putting the right technology in place.” He also said his country is seeking to implement this strategy across Gulf countries.

McCully said that New Zealand can be a logical partner for resource-rich Gulf countries as a producer of food in places like Africa, where experts say half of the potential agricultural land is under-utilised.

The overall value of the bilateral trade between the GCC and New Zealand reached $5 billion last year, the minister said. New Zealand is witnessing a remarkable increase in business ties with the GCC in the face of a 10 per cent spike in trade annually, McCully said.
New Zealand’s exports to GCC countries were estimated at $1.5 billion (Dh5.5 billion) in 2012 with UAE alone accounting for $507 million. Saudi Arabia leads the list of Gulf exporters to New Zealand followed by the UAE he added. New Zealand’s imports from the GCC reached $2.8 billion with the UAE accounting for $266.5 million last year. New Zealand has more than 85 companies operating in this region, with ten based in the UAE, a figure that the New Zealand government hopes to boost.

“These figures serve to underline the strengthening trade and political relationship between these countries.”

“We have a strong believe in the Gulf market and we expect further growth this year.”
Pointing to the importance of the GCC market, he added; “Here there is a market, and these countries are growing despite world challenges, and New Zealand has a good air link with these countries.”

However, the minister said that while New Zealand is well known as a food and beverage exporter, “increasingly our exports to the Gulf region are diversifying to include ICT (information and communication technology), education and consultancy, and specialised manufacturing”.