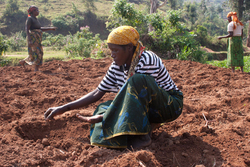 IN SUMMARY
• Foreigners will also not be allowed to lease land for a period exceeding 49 years.
• The amendments will also focus on land use and ownership, as well as the obligations of landowners.

Individuals and investors who fail to put their land to use will face stiff penalties, which include repossession, if amendments to the law are passed by parliament.

In addition, foreigners will not be allowed to lease land for a period exceeding 49 years.

The new laws, according to the government, will ensure proper utilisation and management of land.

The Parliamentary Committee on Agriculture, Livestock Development and Environment has been tasked with reviewing the 2005 land laws. It will then file its report in parliament for approval.

The amendments will also focus on land use and ownership, as well as the obligations of landowners.

According to Emmanuel Nkurunziza, the director­general of the Rwanda Natural Resource Authority, if the amendments are approved no foreigner will own land indefinitely.

“Under the revised laws, only Rwandans can be freeholders of land while foreign companies with less than 51 per cent of national shareholding cannot acquire land ownership titles,” Dr Nkurunziza said.

He said the government will not give individuals land without proper plans ready for implementation.

Dr Nkurunziza stated that the proposed law will impose sanctions on investors who acquire land but fail to use it.

“ If a landowner fails to abide by the plan he once envisaged and holds the land unutilised for some time, the district shall get back the land and reallocate it to a new owner,” he said.

The government has already repossessed parcels of land from foreigners who have failed to implement the projects they had promised to undertake on the land.

In 2011, the government seized approximately 100 hectares of land from an American investor in Bugesera District after he failed to construct a factory as he had promised.

Dr Nkurunziza also issued a stern warning to investors, especially those in Kayonza District, that they risk losing their land for failing to abide by their agreements.

The government also says the new law will ensure that national land use and development planning provide adequate protection of the natural resource base.

The amendment is also aimed at encouraging citizens’ participation in the decision making process on land use.

According to Natural Resources Minister Stanislas Kamanzi, the amendments will also help regulate the land size.

“As per the amendments, we will regulate that; at least one can have a minimum of five hectares for investment. If it is not enough, the ministry will grant him more,” Mr Kamanzi said.