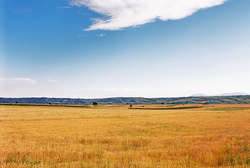 WAM ABU DHABI: Vice Chairman of Al Dahra Agricultural Company, Khadim Al Darei, and the Finance and Economy Minister of the Republic of Serbia , Mladjan Dinkic, signed a preliminary agreement for agricultural investment in Serbia, at an official ceremony held at the Ministry of Finance and Industry in Abu Dhabi.

The signing of this preliminary agreement marks the beginning of joint investment in eight Serbian farming companies, upgrading of agricultural infrastructure and irrigation systems, acquiring new agricultural machineries and technologies and developing existing agricultural lands for the cultivation of various crops like wheat, barley, corn, soy beans, sugar beet, citrus fruits and forage (alfalfa) over an area of about 14,000 hectares (about 33,300 feddans) of owned and leased land.

The intended aim is to meet Abu Dhabi's vision and strategy for long-term food security whereby a share of the crops production will be supplied to the United Arab Emirates market while another share will be dedicated for local consumption in Serbia and for marketing and trading on the international market.

In terms of logistics, bulk production will be shipped through the Danube river and the Constanza port while containerized production will be exported by road to Montenegro and by rail to Croatia to then be exported by sea to the final destination. Al Dahra Agriculture also plans to make significant investments to upgrade the logistics supply chain out of Serbia in terms of storage and shipping.

Al Darei commented, "Al Dahra is very pleased to partner with the Serbian government on this long-term investment that will contribute to the execution of the food security and sustainability vision of the Emirates. This joint venture represents another milestone in the company's strategy and efforts to expand and diversify its sources of supply and growing its commercial activities alongside fulfilling its Abu Dhabi contractual government commitments. These investments will enhance Serbia's position on the international agricultural trading map, will create multiple local employment opportunities while the introduction of new and modern technologies will bring great benefits to the Serbian farmer directly ".

For his part, the Finance and Economy Minister of Serbia commented, "It is a great honor for the Serbian government to sign this preliminary agreement with Al Dahra Agriculture. We strongly believe that this partnership will help to boost the agriculture sector in Serbia which constitutes one of the key sectors contributing to the economic growth. The investments to upgrade the agricultural and irrigation infrastructure will not only benefit farmers but the society as a whole. We look forward to jointly reaping the benefits of these investments".