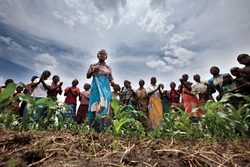 Maize field in Malawi: Women account for 70 per cent of Africa’s food production, but often do not have secure access to land.

Felitus Kures is a widow living in Kapchorwa, northeastern Uganda. Her husband’s death left her solely responsible for their children. To meet their needs, she depended on the small piece of land she and her husband had farmed together. But just months after his funeral, her in-laws sold her husband’s land without her knowledge. “We only realized this when the buyer came to evict us,” Ms. Kures explains. She was able to regain use of the land after she got legal assistance with the help of the Uganda Land Alliance, a civil society group that campaigns for land rights.

Ms. Kures’s plight is a common one in Africa, although she was more fortunate than most other women. Many never regain access or rights to matrimonial land lost after divorce or the death of a spouse.

Yet women often lack rights to land, notes Joan Kagwanja, a food security specialist with the Alliance for a Green Revolution in Africa, an NGO that works with small-scale farmers to promote agricultural productivity. Land rights tend to be held by men or kinship groups controlled by men, and women have access mainly through a male relative, usually a father or husband. Even then, women are routinely obliged to hand over the proceeds of any farm sales to a male and have little say over how those earnings are used.

Moreover, such limited access is very tenuous and can be quickly lost. One study showed that in Zambia more than one third of widows lost access to family land when their husbands died. “It is this dependency on men that leaves many African women vulnerable,” Ms. Kagwanja told Africa Renewal.

The spread of HIV/AIDS and the stigma associated with the disease have only made women’s land rights more precarious. Widows of men who die from the disease have often been accused of bringing the malady into the family, possibly leading to the confiscation of their land and other property.

In response, activists are fighting to introduce or strengthen laws intended to give women more secure access to land and are combating social norms and practices that stand in their way. Despite many obstacles, they are making headway here and there.

Researchers with the International Food Policy Research Institute (IFPRI), based in Washington, DC, note that the marginal nature of women’s land rights is an historical problem in Africa. Before colonial rule, land ownership and access took diverse forms but were largely vested in lineages, clans and families, with male leaders exercising day-to-day control. Members of a particular lineage or clan would seek rights to use land from those community or family leaders.

Except in a few communities where inheritance passed through the mother, land rights were typically only inherited by sons. Women rarely had full rights to land. They were seen as secondary claimants, through male relatives.

Benjamin Cousins, an agrarian specialist who teaches at South Africa’s University of the Western Cape, points out that historically women had traditional protections that ensured continued access even after separation, divorce or widowhood. There also were traditional means of arbitration to which women could appeal if access was contested.

But colonial rule led to the introduction of Western systems of land tenure. In East and Southern Africa, the high number of white settlers encouraged the privatization and subdivision of land, held under individual freehold titles. In West Africa much land was left under communal forms of ownership, managed by customary leaders.

At independence, some new governments, as in Tanzania, Mozambique and Benin, proclaimed state ownership over all land. In Kenya and South Africa private ownership existed alongside lineage or clan ownership. In Nigeria, clan and lineage ownership coexisted with both state and private ownership, especially in urban areas.

Over the years, rapid population growth has contributed to the overuse of land and to the depletion of soils. This has made fertile land more valuable and increased competition for its control. Such pressures, together with changes in family structures and clan relations, have eroded traditional social safeguards that ensured access by women. So while many land disputes in Africa are still formally governed by customary law, notes Mr. Cousins, “many protections of women have not been accurately carried forward” into modern life. Moreover, he told Africa Renewal, today there are many situations, such as cohabitation without marriage, to which traditional norms do not apply. Consequently, “Many women have lost access to land.”

Many African countries today recognize both “traditional” rules of land ownership and Western-type statutory laws. In Nigeria, the state assumed ownership of all land after independence in 1960. Although this weakened customary land tenure, traditional laws still were recognized by the government in areas of long-established clan and lineage ownership. The recognition of Islamic law in Nigeria’s northern states complicated the situation further.

One solution that Western development experts initially promoted to overcome the shortcomings of customary law was to give land titles to individuals. Esther Mwangi, a land rights researcher at Harvard University, notes that governments in East and Southern Africa followed the course of land titling, in an effort to ensure that individuals had legal power over their land. This policy was expected to help women secure legal rights to properties that they owned or inherited.

“In the areas where I have been working, the privatization process has actually stripped women of their access,” Ms. Mwangi told Africa Renewal. During titling operations, it was mainly men who got their names on the documents because they were deemed to be the “household heads.” Widows lucky enough to get land were allocated the smallest lots.

Land rights activists suggest that one way to give women guaranteed access to land is to separate formal ownership of land from the ability to use it. Thus, while the land may be registered in the name of a man, he would be barred from selling it without the consent of his wife or wives or other heirs. Ghana has a “head of family accountability law” that is intended to ensure that \family property cannot be sold without others being informed, giving consent or benefiting from the proceeds.

“Another alternative would be for land to be put in the name of families or both men and women to have their names on the certificate,” suggests Ms. Mwangi. “Where resources such as water, sanitation and grazing land have to be shared communally, then whole communities could be identified as owners of the land, with everyone having equal access.”

But such ideas may be easier proposed than implemented. Activists for women’s land rights have tried to have laws passed in many countries, with mixed results. In Uganda, where there was very active lobbying by the Uganda Land Alliance for both men and women to be listed in title deeds as co-owners, the bill came to parliament repeatedly and failed each time.

Where progressive laws have passed, things do not necessarily get easier. In Mozambique, civil society groups gained a law in 1997 entitling women to secure access to land and property. “We saw the land law as a victory,” Lorena Magane of the Rural Association of Mutual Support told a reporter. But Rachael Waterhouse, an editor of a report on gender and land in Mozambique, says that while the law was fine in theory, implementation proved difficult because traditional courts, which most rural women use, still consider the man the head of household and therefore the rightful authority over land.

In Ghana the 1985 Intestate Succession Law and the Head of Household Accountability Law were both intended to create greater security for widows and children. If a man died without a will, the succession law decreed that his property would be equally divided and distributed among his widow, children and other members of the extended family. Yet a study by the UN’s Food and Agriculture Organization (FAO) in Ghana’s Volta Region found that few women knew of either law and that customary practices continued to determine inheritance. That left many women without access to land after the death of their partner. 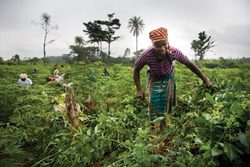 Cassava farming in Liberia: Women’s rights to land must be legally recognized, and institutions are needed to enforce those laws.

What women need, argues Ms. Kagwanja, is for their basic rights to be entrenched in constitutions and for equal rights of property ownership to be clearly stipulated in the law. Where this has already been done, it is necessary to bring all inheritance and land laws into harmony with the constitution, so that they say the same thing. In addition, legal institutions responsible for implementing the land laws need to operate equitably, be friendly to women and extend their reach to the countryside.

“At present,” she says, “we have very centralized institutions. Moreover, it is men who are in charge of the dispute-resolution systems and the court systems are very expensive and intimidating.”

Traditional land ownership systems in particular need some rethinking, she says. Local chiefs authorized to allocate land generally assign it to men. “How do you democratize the systems for allocation of land?” Ms. Kagwanja asks. “Do you develop new localized land boards, where you elect members of the land board and insist on a requirement for gender equity, as is the case in Tanzania and Uganda? Or do you democratize the old system? These are some of the questions we need to answer.”

Broader cultural change is also vital, says Ms. Mwangi. Those who decide land allocations have particular cultural understandings of the role of women.

She spent some time talking to men and women about sharing land ownership. “I think that the men are not ready,” observes Ms. Mwangi. “They don’t seem very sensitized to the idea that women can be decision-makers when it pertains to land.” That is a paradox, she adds. “Women’s labour is key to productivity, yet that land is literally out of reach for women.”

Mr. Cousins agrees. “To address land rights, you need to address the unequal power relations within families. Unless you change the power relations, the legal definition of who has rights may not make much of a difference,” he says.

There are some positive achievements, however. In Swaziland, women cannot own land because they are considered minors under the law. Yet some HIV-positive women who lost access to land after their husbands died were able to negotiate with a female chief to persuade other chiefs to give the widows land they could use to secure their livelihood.

In Kenya, community watchdog organizations and other groups providing home-based care for those living with HIV/AIDS are intervening. When they encounter property grabbing, they negotiate, mostly with male members of the family, for women and girls to retain access to the land and property.

In Rwanda, the government passed a law in 1999 giving women inheritance rights equal to those of males, overruling traditional norms by which only male children could inherit. This has enabled widows and female orphans of the 1994 genocide to secure land.

Currently, UN agencies such as FAO, UN Women and the UN Development Fund are working with non-governmental organizations to raise awareness among women of their rights and to support efforts to entrench equality of access in national laws.

UN Women’s Africa programme for rural women has several pillars through which women’s role in agricultural transformation can be enhanced. It considers equitable land allocation as critical to such a transformation. One of its strategies is “to strengthen the capacities of the ministries of agriculture to prioritize support to women food production systems in their planning and resource allocation mechanisms.”

One of UN Women’s key messages is, “Rural women play a key role in food production and food security in Africa.” The UN agency encourages governments, development partners and the private sector to enhance women’s rights to land, arguing that “if it benefits rural women, you can call it development.”