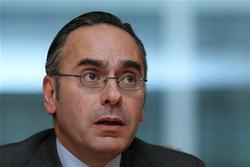 Melting ice at the North Pole is affecting weather patterns in the northern hemisphere, just when the world will have more mouths to feed, particularly in Africa, Marino Valensise, chief investment officer of Baring Asset Management, told the Reuters Global Investment Outlook 2013 Summit.

"(Climate change) is a disaster," Valensise told the summit, held at the Reuters office in London.

"We don't know whether there will be warming or not warming, we just know it will be different and this brings a lot of volatility to weather ... which is bad for agriculture."

Surging food prices have been an issue over the past two years, particularly in emerging markets, and were seen as a factor driving the Arab Spring uprisings.

More problems over food, particularly as the global population grows, could lead to further instability and social unrest which would only drive food prices even higher, said Valensise of Baring, which has assets under management totaling 31 billion pounds ($49.71 billion).

Investments may not pay off on a one-year horizon, but are likely to be profitable on a five to 10-year bet, Valensise said.

"If there is one thing I would choose for the next 10 years and never touch it, that's the one," he said.

"I'm not young but I'm not old, I'm putting (it in) my pension fund and I think I have enough years to see this theme (out)."

Agricultural commodities have surged this year, and other participants at the summit said the drought in the United States and its impact on wheat had offered buying opportunities.

Investors could get into the agricultural investment theme by buying wheat, soybeans and corn, directly or through an exchange-traded fund (ETF), buying the stocks of large agricultural companies or equipment makers like Monsanto or Deere & Co, or taking tracts of agricultural land, Valensise said. It was also possible to arbitrage between the different types of investments.

Inequality and the risk it throws up for social unrest are a concern not just for poorer parts of the world, but also for the United States, where the widely used GINI measure of wealth distribution shows the average worker no better off than 20 years ago, Valensise said.

But positive signs in the housing sector should help U.S. consumer sentiment, he added.

In an investment environment which appears to contain fewer uncertainties next year than over the past few years, Valensise said he liked riskier emerging market equities, rather than stocks in Europe.

"We have decided to by-pass Europe altogether and go from the U.S. to emerging markets," Valensise said.

"If the world economy is stabilizing and there is going to be more risk appetite, what do you want to buy?"

The European banking sector was particularly problematic after years of crisis and continued deleveraging, he said.

"Banks are a broken business. We do own certain banks in Europe, when there is a fundamental reason, but the group as a whole ... is not compelling enough to go into."