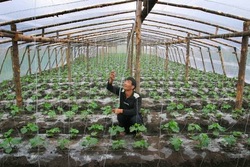 More Chinese companies and individuals are looking for sources of growth in the rich land of Russia's Far East region, as Wu Yong reports from Suifenhe, Heilongjiang province.

"If only the north wind could be colder and stronger," he said, as that would help him, as well as other Chinese farmers operating across the border, to run their combine harvesters on the frozen-solid farmland.

Liu was among the first Chinese farmers to tap the potential of Russia's Far East as a major global grain producing center.

He currently has 16,000 hectares of farmland in Russia, and he is expecting his grain harvest to exceed 20,000 metric tons this year.

These would sound like impossible numbers for most Chinese farmers, who traditionally operate small, densely packed plots. Indeed, Liu said: "Primorsky is a miraculous land. It offers bountiful harvests at low costs."

For farm contractors in Russia's Far East, the annual land use fee is commonly around 12 yuan ($1.9) per hectare.

Nongken Beidahuang Business and Trade Group, a  Heilongjiang-based agricultural corporation, is working with a Russian partner to build a new "Friendship Farm" in Russia - covering an area of more than 130,000 hectare
Entrepreneurs in northern China have been talking about the agricultural opportunities across the border since Russian President Vladimir Putin set out a plan to develop Russia's Asian areas at this year's APEC summit, held in Vladivostok, the administrative center of Primorsky Territory.

But it's not just talk. In fact, hundreds of companies and even individual farmers, Liu being one of them, are already involved in agricultural projects in Russia's Far East, according to the commerce bureau of Northeast China's Heilongjiang province, which shares a border of more than 2,900 km with Russia.

In addition, the province has similar conditions in terms of geography, temperature and precipitation as Russia's Far East.

Chinese farmers in Russia are mainly involved in grain and vegetable farming, livestock breeding, and the processing of agricultural products.

Dongning Huaxin has been working with a local partner since 2004 to develop 40,000 hectares of farmland in Russia over a 49-year period. Since 2006, its yield per unit has ranked No 1 in soybeans, corn and wheat in Primorsky Territory.

"Agriculture is one of most promising areas for Sino-Russian economic cooperation," Sun Yao deputy governor of Heilongjiang province, said in an interview with China Daily. China has capital and grain production technologies, while Russia has abundant land resources. "By combining their strengths, the two countries can contribute a great deal to the world's food security," he said.

Sino-Russian agricultural cooperation dates back to the 1950s, when the then Soviet government dispatched experts to help China establish its largest modern farm, the "Friendship Farm", in Heilongjiang.

Nowadays, more Chinese are starting off agricultural businesses in Russia, attracted by the opening of Russia's economy and China's rising domestic demand.

Nongken Beidahuang Business and Trade Group, a Heilongjiang-based agricultural corporation, is working with a Russian partner to build a new "Friendship Farm" in Russia - covering an area of more than 130,000 hectares, said E Zhongqi, deputy director of Heilongjiang provincial commerce bureau. In farm machinery alone, the investment was in excess of 10 million yuan, he said.

Russia utilizes only three-quarters of its 168 million hectares of cropland. And in the vast but thinly populated Far East region there are around 6.7 million hectares of idle cropland, which were abandoned during the transition to a market economy after the breakup of the Soviet Union, said Qu Wei, a researcher in Sino-Russian relations at Heilongjiang Academy of Social Sciences.

Siberia and the Far East have suffered from a population decline over the past 20 years. These regions are short of as many as 700,000 to 800,000 workers.
Zhu Changxin, commerce bureau director in Heilongjiang's Dongning county, said local farmers first worked for Russian companies and then started their own businesses in Russia's Amur and Jewish autonomous regions.

Besides China, other countries, including Japan, South Korea and New Zealand, are participating in agricultural development in Russia's Far East, where farmland is concentrated in Primorsky Territory and Amur Region.

Some Russian officials have recently proposed the concept of a Far East "grain corridor" to transport and export grain output from Siberia to the Asia-Pacific region. An official from Russian United Grain Co once stated that Siberia alone had the potential to export 8 to 10 million tons of grain by 2020.

Qi Wenhai, a professor at Heilongjiang University and an expert on Russian affairs, said that the "grain corridor" concept was part of Russia's overall plan for integration with other economies in the Asia-Pacific region.

But Qi said that security concerns and the potential threat of imported grain to China's farming sector were two problems that could arise from Sino-Russian agricultural cooperation.

"Some Russian officials are oversensitive to foreign capital and labor in the Far East," which leads to frequent changes to laws in this field, Qi said. He even warned that a massive influx of foreign capital in Russia may backfire, as Russians need time to strike a balance between opening their economy and concerns over national security.

"Ours is a non-governmental organization that carries out self-regulation and prevents violations of Russian laws. But we would also lobby for more government support," said Liu Jianping, a Chinese farmer in Primorsky Territory.

But Liu also has another problem - how to sell the grain he grows in Russia back into China.

Russia traditionally exports grain to the Middle East and North Africa. But the Far East, including the foreign farm operators there, can make the best of its resources only by exporting to Asia-Pacific region.

Meanwhile, China still restricts the import of rice and corn, although it has become much easier to import soybeans. Only two State-owned enterprises, China National Cereals, Oils and Foodstuffs Corporation and Jilin Grain Group, are currently authorized to import grain.

Big companies like Huaxin can obtain some concessions in the grain import business, but other Chinese companies have to sell all their harvests to local dealers.

But it may not be necessary to sell all the grain grown in Russia back to China either. "As a nation with a population of 1.3 billion, China should have the insight to ensure its own grain supply. But if Chinese farmers in Russia sell their produce to other countries, they can also help China by contributing to overall global food security," said Zhang Zhongjun, assistant representative of the UN Food and Agriculture Organization in China.

Zhou Huiying and Han Junhong contributed to this story.
Contact the writer at [email protected]