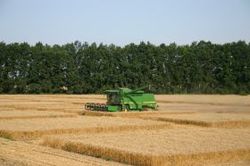 Trigon Agri highlighted the importance of location in Russian agriculture as, revealing drought had wiped out crops in some areas, it revealed plans to swap 78,000 hectares pf its landbank for 71,000 hectares – and pay a cash sweetener on top.

The Black Sea farm operator - which in March revealed plans to 18,500 hectares of land in its central Russian Samara operation for 30,000 hectares in the southern area of Rostov – revealed it had "expanded" the deal after a collapse of nearly 50% in its Russian crop production.

The deal will now include all the Samara farms, plus 33,000 hectares in Stavropol, in southern Russia, where this year's crops suffered particularly from "severe drought and extreme heat", Trigon Agri said.

"As a result of the drought, the group lost almost its entire crop" in Stavropol, as well as in Nikolaev, Ukraine, the group said, estimating the area of its farms affected at 38,000 hectares – equivalent to 44% of the land it had expected to harvest.

The new deal will reduce Trigon Agri's landbank - and see it pay a E15.1m cash sweetener on top, if with the passing on of E6.4m in debt - in order to secure the land in Rostov, near Russia's Black Sea coast.

However, the acquired land has "exceptional characteristics", Joakim Helenius, the Trigon chairman, said.

While relatively close to the Stavropol farms being disposed of, the Rostov land receives 30% more rainfall, to judge by the 10-year average of 485mm a year. The Rostov farms are connected to a system of irrigation canals.

Furthermore, it is close to ports, boosting the potential for tapping lucrative export markets.

"Domestic farm-gate grain prices in Russia tend to fall as the distance to the main ports increases," Mr Helenius said.

"The very long distance to the Black Sea ports from the Samara region proved to be a major handicap for Trigon Agri's operations in that region."

The deal also further highlights the differences in farm performance within Russia, whose vast area includes a range of climates and soil types, which have seen some farms perform well even this year, when the overall grains harvest tumbled by one-quarter.

Black Earth Farming, situated in the black soil region around Kursk and Voronezk, last week revealed a 21% rise in spring crop yields, noting that "conditions were more favourable from June onwards", even when much of the rest of Russia was suffering drought.

Dairy-to-corn group Ekosem Agrar, which has a spread of farms, said that it had "more than offset the lower harvest in Siberia, which suffered from a severe drought, with higher crop yields in the important black soil region".

Andrey Sizov, managing director at Moscow-based analysis group Sovecon, said that almost all companies focused on the black earth region are doing very well this season", boosted by strong yields at a time of high prices.

"It is in fact is the only region which hasn't suffered from bad weather conditions this season," he told Agrimoney.com.

Investor support for Ekosem Agrar, which is not listed, was highlighted this week by a E65m bond issue which closed on Monday less than three hours after it was launched.

The bond, which carries a coupon of 8.5%, attractive to investors in times of depressed asset yields, was "heavily oversubscribed", the group said.

Trigon revealed a 23% rise to E14.4m in losses for the July-to-September quarter, reflecting the poor harvests in Stavropol and Ukraine's Nikolaev.

The group's Russian wheat crop was particularly badly affected by drought, with output slumping 75% to 10,700 tonnes.

The result would have been worse were it not for growing profits in dairy, helped by the purchase of an operation in Estonia which, coupled with productivity improvements, saw group milk production rise 70% to nearly 20,000 tonnes in the first nine months of the year.