Brazil farmland prices quadrupled over the past decade outpacing inflation 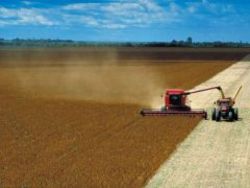 The country is set to become the world largest soy bean producer ahead of the US
MercoPress | Monday, December 3rd 2012

Brazil farmland prices quadrupled over the past decade outpacing inflation

Prices for farmland in Brazil surged by an average 14% a year to nearly quadruple over the past decade, well outpacing inflation and nearly matching gains made by São Paulo's blue-chip Ibovespa stock index, a new study shows.

Improving diets in economies such as China have driven up prices of commodities like soybeans, corn and animal proteins, which in turn have led investment and pension funds to buy Brazilian farmland.

This has steadily pushed up the prices of and investment returns from Brazil's increasingly productive tropical farmland, according to research from São Paulo-based consultancy Informa Economics FNP.

Between January 2002 and December 2011, farmland appreciated 278% on average in Brazil, while cumulative inflation in that period came to around 88%.

During those 10 years, Ibovespa - the main blue-chip index on the São Paulo exchange - gained 294% but took investors on a rollercoaster ride after the financial crisis in late 2008.

High sustained prices of grains such as soy and corn over the past year have induced both farmers and investors to expand into frontier areas where land is cheaper due to the lack of transport infrastructure.

Investors' following farmers' lead into these areas is heating up land prices all the more quickly.

“Until 10 years ago, the land market was made up of mostly those who get their boots dirty ... today no,” FNP Director José Vicente Ferraz said. ”But for sure, (interest from investment funds) has made a big difference.“
Ferraz considers investments in land to be safe even though they lack the liquidity that investors can get from a bond or stock. And the financial crisis has fed into interest from investors seeking better returns.

Buyers have flocked increasingly to more remote areas in the northeast tropical savannah known as the Cerrado. States such as Maranhão, Piauí, Tocantins and Bahia have become known as ”Mapitoba,” the fast-growing farming frontier.

“Mapitoba is the region with the greatest appreciation,” he said. “It may not continue as strong in the next 10 years as it did in the last, but we still think the prices will rise.”

Brazil is expected this year to surpass the United States in soy production for the first time ever, with an 8% increase in planted area due in part to the opening of new farmland.

Still, not all land in Brazil is appreciating as it is in Balsas. Prices of some semi-arid lands are only rising 1 percent a year due to their lack of productive potential, Ferraz said.

He said there are three basic ways to profit from land investments: selling land as prices appreciate; selling agricultural commodities produced on the land; and turning raw, cheap, unproductive land into a property ready to plant and produce. Sometimes investors can profit from all three activities.

“When you sum up those three gains, you can reach returns of 15 to 18% on capital,” Ferraz said.

In 2010, Brazil's attorney general imposed severe limits on how much land foreigners can control in the country. Although this may have made investors more cautious, it has not stopped foreigners from buying. Instead, they have been teaming up with Brazilian nationals to get around the law, Ferraz said.