RSPO fails to act as Muara Tae is destroyed 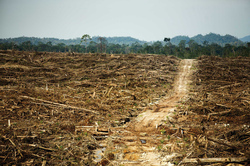 RSPO FAILS TO ACT AS MUARA TAE IS DESTROYED

LONDON: The credibility of the international Roundtable on Sustainable Palm Oil (RSPO) has been called into question over its failure to act against a company bulldozing ancestral forests and perpetrating human rights abuses in Indonesia.

First Resources Ltd has submitted documents to the RSPO falsely claiming that its subsidiary PT Borneo Surya Mining Jaya (PT Borneo) obtained the consent of local communities for an oil palm plantation on their land in Kutai Barat, East Kalimantan. The documents also claim PT Borneo did not begin operating before conducting Social and Environmental Impact Assessments in line with its obligations as an RSPO member.

But at the same time, PT Borneo was bulldozing farmland and forests belonging to the indigenous community of Muara Tae, assisted by the intimidation of armed police brought in to protect the company.

EIA submitted a comprehensive complaint to the RSPO on October 17, outlining First Resources' breaches of the body's Principles and Criteria and New Planting Procedure.

According to its own guidelines, the RSPO should have determined whether the complaint was legitimate within two weeks of its submission to its Grievance Panel.

Accepting the complaint as legitimate would have obligated First Resources to cease operating in Muara Tae until the dispute was resolved. However, the RSPO secretariat has to date not done so and has repeatedly failed to inform EIA of the deadline for its decision, three weeks after receiving the complaint.

Masrani, the Petinggi (village head) of Muara Tae, attended the RSPO's annual roundtable in Singapore last week. At the meeting, both Bambang Dwi Laksono, Corporate Head of Sustainability at First Resources, and Ravin Krishnan, RSPO complaints coordinator, encouraged the community to enter into dialogue with the company.

However, in meetings with First Resources during the past two years, the community has repeatedly rejected the proposed plantation, a view which has been entirely ignored. Indeed, while offering the prospect of dialogue to Masrani in Singapore, First Resources was simultaneously preparing to bulldoze his father's land.

The film Manufacturing Consent, demonstrates how the community has consistently rejected the overtures of First Resources; the testimony provides prima facie evidence that First Resources made false and misleading claims in documents submitted to the RSPO.

Manufacturing Consent also lays bare the impact that First Resources' land-grab is having on the lives of the people of Muara Tae.

Faith Doherty, Head of Forests Campaign at EIA, said: "It's disgraceful that the RSPO has failed to take any meaningful action and farcical that it believes First Resources can be trusted to carry out fair negotiations with the community while it has been utterly disingenuous with the RSPO itself. What sort of dialogue are they expected to have in the presence of armed police?

"The fact that First Resources has the audacity to submit phony documents, carry on destroying community forests without a shred of consent and then turn up at the RSPO roundtable poses some very serious questions about the credibility of the RSPO. Clearly, First Resources doesn't hold its grievance process in very high regard."

Manufacturing Consent includes testimony from a number of villagers in Muara Tae:

Petrus Asuy, Muara Tae elder and customary landowner: "PT Borneo Surya Mining Jaya is destroying forests, depriving the rights of the indigenous peoples of Muara Tae, bringing BRIMOB [riot police] to intimidate people so they don't defend their land. And they have violated our human rights, particularly by damaging the environment. Damaging the sources of spring water for the rivers that flow to Muara Tae and destroying the forest wood and traditional medicines that have been maintained by the community of Muara Tae."

Andreas Singko, Muara Tae elder and customary landowner: "When Borneo Mining Jaya came to the village we all, in the name of the community, refused. Because the land was for us for farming, no more than that. And the forest that remains we will maintain, replanting forests so that they grow. So we are not ready to accept the presence of PT Borneo Mining Jaya."

Pak Doh, Muara Tae customary landowner: "My land was seized by the company. I have never sold or handed over the land. I really love my land. This is a traditional society that does not know the kind of work offered by the company. I'm just living out of making fields, no other job. That's what supports my children and my grandchildren."

Pak Masrani, Village Leader of Muara Tae: "Any company that enters an area should adhere to the principles of FPIC [Free, Prior and Informed Consent]. That is, they should only enter with the consent of the community and without coercion, and the community should be given sufficient information by the company.

"But PT Borneo Surya Mining Jaya's entry into the village of Muara Tae does not comply with the principles of FPIC. Because they did not enter with the consent of the community. They forced entry, demolishing the community territory forcibly. Even though the people resisted them, they remain displaced. They have ignored the rejection by the villagers of Muara Tae."

Manufacturing Consent from EIA on Vimeo.

1. The Environmental Investigation Agency (EIA) is a UK-based Non Governmental Organisation and charitable trust (registered charity number 1145359) that investigates and campaigns against a wide range of environmental crimes, including illegal wildlife trade, illegal logging, hazardous waste, and trade in climate and ozone-altering chemicals.

2. The RSPO New Plantings Procedure, activated in 2009, requires RSPO members planning to develop new plantations to announce their plans before commencing land preparation. Members must demonstrate that they are taking steps to ensure they are in compliance with RSPO Principle 7, which requires that no new plantings:

On September 18, 2012, RSPO member First Resources Ltd gave notice on the RSPO website that it had begun the 30-day consultation period regarding new plantings by PT Borneo. On and around the same date, documents were posted on the website outlining the results of the social and environmental impact assessment and HCV assessment carried out by RSPO auditor TUV Nord, ostensibly demonstrating PT Borneo's compliance with RSPO Principle 7.

These documents, the testimony of members of the Muara Tae community and analysis by NGOs provide clear evidence that First Resources Ltd is operating in violation of the New Plantings Procedure and RSPO Principles and Criteria. In sum, First Resources Ltd has:

- Begun clearing land before carrying out the New Planting Procedure;
- Acquired and cleared local people's land without their Free, Prior and Informed Consent (P&C 2.2, 2.3, 7.5 and 7.6);
- Failed to negotiate with and compensate local people for the expropriation of their land (P&C 7.6).

3. Manufacturing Consent can be viewed at https://vimeo.com/52941829 and EIA's formal grievance can be read at http://ow.ly/f5vhE.