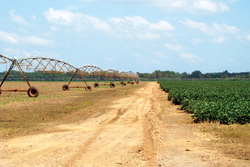 The state’s largest pension fund made its first foray into Arkansas cropland last year, buying a 2,866-acre Cross County farm for $10 million from a German investor.

Continued economic uncertainties are prompting a back-to-the-land movement among investors.

And a favored choice of land is farmland.

“People feel like investing in farmland is very safe and very secure,” said Tommy Drew, a Little Rock real estate broker specializing in agri and hunting properties. “You can grow stuff on it. You can get buried on it. You can get back to the basics.

Increased demand has helped boost the value of irrigated cropland in Arkansas by an average of 10.8 percent annually during the past five years, according to the U.S. Department of Agriculture.

That kind of appreciation, combined with a string of profitable harvest years, has brought new-found cachet to Arkansas cropland and attracted the gaze of investors seeking to diversify portfolios.

Despite the risky reputation of farming thanks to the vagaries of commodity prices and weather, agri real estate is viewed as a smart investment hedge.

“Since 1970, farmland has averaged a better cash-on-cash return than the S&P 500, but from a risk profile, it’s viewed more like a corporate bond,” said Gar Lile, president of Lile Real Estate Inc.

“Everybody thinks we’re heading into a big inflationary period, and farmland has outperformed inflation during the past 15 years.”

The value of farms vary with the soil type, topography, access to water and man-made improvements to the land.

“Prices for Arkansas cropland are all over the board,” said Lile, whose Little Rock firm specializes in rural properties. “For really good land, prices are in excess of $4,000 an acre.

“There is a tremendous amount of demand for quality land, improved farms with good grades and good water. The market is really seeking large tracts with sandy loam ground for high rotation farming.”

The biggest portfolio up for sale in the state includes five east Arkansas farms totaling more than 27,000 acres.

The properties were assembled during the past 30 years by the Church of Jesus Christ of Latter-day Saints. (For more on those developments, click here.)

Agri veternan Ted Glaub won’t be surprised if demand for premium cropland continues to push values toward $10,000 per acre during the next five to 10 years.

“We’re seeing sales I can’t believe,” said Glaub, owner of Glaub Farm Management in Jonesboro. “A 320-acre precision-leveled farm in the Missouri Bootheel sold for $7,100 per acre. Another area farm sold in the $7,000-per-acre range.”

Cropland holds the allure of a reliable annual income stream from rent and a share of the harvest plus the additional luster of appreciation.

Investor landlords rejoice with their tenant farmers bringing in sheaves of cash.

“It is capital-intensive, but there are good returns,” said Jerry Meyer, real estate manager for the Arkansas Teacher Retirement System.

“Farmland produces relatively good cash returns from rents and historically good appreciation. A major component of our investing is appreciation.”

The $10 million transaction, which closed in August 2011, included a 160,000-bushel grain storage facility. Rice, soybeans and corn are the crops of choice for the ATRS acreage.

“Once we hit 2008 with the beginning of the recession, inflation concerns became a very big driver, and a lot more dollars became available.

“Investors wanted to have a higher percentage in real assets that are positively correlated to inflation.”

The rental structure provides a financial safeguard for farm investors not found in all real estate holdings.

“You can always lease farmland for more than the cost of ownership regardless of how good or bad times are,” Halderman said.

“That is one of the appealing aspects of farmland that differentiate it from other real assets.”

In the case of ATRS, the Cross County farm is leased for $150 per acre.

That yields a minimum 4 percent return of about $430,000. After deducting the land rent, the pension fund gets an additional 25 percent share of harvest revenue.

The arrangement gives the tenant farmer and ATRS added incentive to work together to maximize crop yields.

The lease rate and harvest split varies from farm to farm. Sometimes the lease is higher, and the split is lower.

“I’m hearing some cash rents of up to $350 an acre,” Glaub said. “Some of the top-producing farms are in that range. How long this will last, I don’t know.”

The savvy investors enhance their farm investment by making improvements to drainage, irrigation and more to help boost productivity.

“If you take care of your land, it will take care of you,” said Tommy Drew, who also is a landowner with interests in farms in Jackson, Lonoke, Prairie and Arkansas counties.