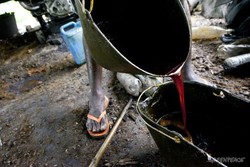 Palm oil is used by Cameroon people as a basis for their food consumption. (Jan-Joseph Stok / Greenpeace)

Ecological and economic welfare are two sides of the same coin and having to choose between developing economies and societies on one hand, and protecting the environment on the other, is a false dilemma. This false dilemma is often used by private companies to dismiss civil society and local communities, mislead policy makers, and then carry on with questionable practices.

Let me explain. Sub-Saharan Africa has been the scene of a huge land grab in recent years, with overseas governments and businesses buying up or securing long-term leases on large tracts of land. Some of the deals are straightforward acquisitions but many are contentious to say the least.

According to a number of the agribusiness corporations that are investing heavily in developing vast palm oil plantations throughout Central and Western Africa their primary aim is bringing much-needed revenue to local economies, providing jobs and improving the lives of the people living there. Don't let yourselves be fooled by this seemingly altruistic discourse: we rarely hear any mention of the millions to be made in trying to satisfy the unquenchable global thirst for palm oil. Could this be the real motivation?

A perfect illustration of this false dilemma is Herakles Farms' rhetoric in relation to their latest project in Cameroon. Clearing of forest has recently begun; but this forest is important because it provides a key corridor between five protected areas including the iconic Korup National Park. This concession sits within the Guinean forested region of western Africa, which has been identified as one of the 25 most important biodiversity hotspots on earth, and is roughly 10 times the size of Manhattan, the island that is home to the headquarters of Herakles Farms.

The forests of Cameroon store huge amounts of carbon, critical to maintaining the global climate and preventing huge emissions of CO2, but they are also essential for local communities. These forests provide a home and income for thousands of people through cocoa farming and other commodities including palm oil production.

More than 70 percent of land in sub-Saharan Africa falls under the definition of customary domain. This means land that is formally state-owned but has been used by local communities, often for generations, although these customary users, such as those in Mundemba, Fabe and other areas of Cameroon affected by proposed developments, often have very limited rights.

The palm oil project in Cameroon has provoked fierce local opposition and division. Many local farmers Greenpeace spoke to in the villages falling under the concession area say that people have been forced off their land or that lines physically demarcating the concession area have been drawn on their land without prior notice. According to one lady from Fabe village who has been evicted from her farm:

"If the company takes all of the land then they will be the death of all of us. What will we live off? We will not have a livelihood. (...) Where will people do their farming? "

It seems incongruous that Herakles Farms claims it is trying to improve the lives of local people but then there is scarcely any consultation with those same people over what is to be done with the land they depend on for their livelihoods, nor any serious acknowledgment of the risks posed to local environments and the global climate.

As an African, I am used to questioning supposed solutions to poverty, especially when they are implemented without the collaboration of the people they are allegedly helping. As the head of Greenpeace, I can say that we encourage development, but do not support development that is not mindful of people and nature.